Spirulina, better powder or tablet supplement? All the differences

The differences between spirulina in powder or in tablets. Here are all the benefits, contraindications and how to use spirulina algae.

What are the differences between spirulina algae powder and tablet supplements? Dosage, benefits and contraindications

La Spirulina it is a particularly well-known and, above all, healthy ingredient that also lends itself to various uses in the kitchen and beyond.


What is it about? According to Harvard Health Publishing, the Spirulina is a type of seaweed, a microscopic freshwater plant harvested for its health benefits, and sold dried as a supplement.

Le blue-green algae they thrive in warm climates and warm alkaline waters. Many peoples around the world use spirulina as part of their daily diet for its powerful nutritional benefits. It is available dried and freeze-dried, in powder or tablet form, or in flakes.

What is spirulina algae?

Spirulina, also called Arthrospira platensis, is an alga belonging to the Cyanobacteria class; it has a very intense dark green color due to the presence of chlorophyll, and with blue reflections because it is composed of the pigment of phycocyanin.

Spirulina is a freshwater cyanobacterium, and is born and grows mainly in lakes and streams where the environment is particularly alkaline.

Its so original name is due to the shape of its filaments, which resembles a spiral, but which are not visible to the naked eye because they are microscopic. 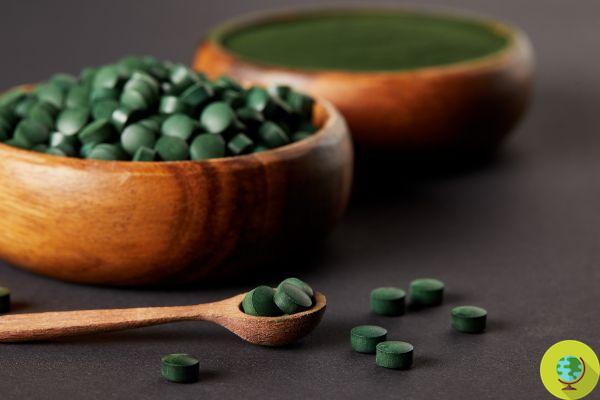 The benefits of spirulina

Before understanding whether it is better to use spirulina in powder or in tablets, it is good to underline that this alga has many benefits, for which it is considered a powerful superfoods. Here are the main ones. (Read also: Spirulina algae: what happens to the body every day we take it)

- antioxidants are useful and effective substances, which help protect the body from free radicals, which are unstable molecules that damage healthy cells.

Spirulina contains antioxidants such as vitamins A, C and E. Una review of August 2010 and published in Cardiovascular Therapeutics found that spirulina's antioxidant and beneficial properties have been demonstrated in a large number of preclinical animal studies, as well as in a limited number of human studies. Evidence suggests that the antioxidants in spirulina may benefit heart health.

Le protein They are found in every cell in the body, and are essential for the proper development, maintenance and repair of muscle, bone, skin, hair and tissue. Proteins also help carry out many of the body's chemical reactions.

Spirulina is a good source of lean protein - it boasts a protein content of 60 percent, making it a much richer source of protein than most vegetables, according to Harvard Health Publishing. A single tablespoon, which has only 20 calories, contains 4 grams of protein, according to the USDA.

According to a study from July 2013, and published in the Journal of the Science of Food and Agriculture, in people with high cholesterol the consumption of 1 gram of spirulina per day lowered triglycerides by 16% and LDL by 10%; in addition, according to one search, people with type 2 diabetes, who consumed 2 grams of spirulina per day, also saw improvements in their cholesterol levels.

(Read also: Spirulina: the side effects and contraindications you should know before using it)

Spirulina comes in many forms, with tablets and powder being two of the most common. Although the main ingredient is the same, namely spirulina, there are some important differences. Let's find out together.

Powders are more reliable for absorption than tablets, as in some cases the tablets may not disintegrate completely, leading to a fewer nutrients absorbed. To ensure that the tablets disintegrate easily, manufacturers often add extra chemicals; also, many tablets are coated so they are easier to swallow.

Some spirulina productions do not exhibit thickeners, but there are many tablets with additives on the market. The latter are used to hold spirulina powder together.

An example is the silicon dioxide, a type of clay, commonly used to bind tablet ingredients, and spirulina pills can contain 20 to 30 percent thickener in a single tablet. This means you have to consume more tablets to get the same dosage of pure spirulina powder.

Spirulina powder, on the other hand, generally contains fewer thickeners than tablets and can be added to smoothies, juices, and other foods. In turn, however, tablets are much more convenient to store and transport than powder.

Spirulina tablets and spirulina powder are both convenient, but tablets typically have a shelf life of longer conservation.

But that's not all, because when choosing the best product it is good to also look at other elements, such as: 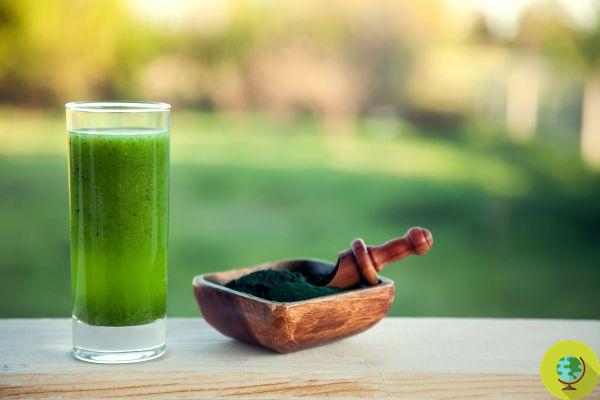 How to use spirulina

La spirulina powder it can be mixed with food, while the tablets can be crushed into a fine powder and added directly to drinks and dishes.

In addition to mixing spirulina powder with juices or smoothies, you can also add it to sauces, salads, and pasta sauces. How? Mix 2 teaspoons of spirulina powder, for example, into the pesto sauce to give your dish an extra boost, or sprinkle the powder on a salad or mix it with a sour cream sauce, or even with guacamole.

It can be added to flavor vegetables, roasts, potatoes or in homemade bread and pasta mixes; spirulina powder is also suitable for the preparation of dessert recipes, such as cookies and cakes.

But that's not all, because the powder version is very versatile; for example, it can also be used in cosmetic field to prepare masks for the skin and hair, or even do-it-yourself natural scrubs.

Spirulina appears to be safe, even in high doses. Some people, however, can manifest side effects such as headache, sweating, nausea, difficulty concentrating and redness of the face.

Avoid spirulina if you have an autoimmune disease, such as multiple sclerosis, rheumatoid arthritis, or lupus, as it may stimulate the immune system, making your health worse. It is also not recommended in case of anticoagulant treatments and for people with phenylketonuria. Also, you should consult a doctor before taking spirulina if you are pregnant or breastfeeding.

Spirulina, because the Aztecs considered it the nectar of the gods (and main ingredient of their cheese) ❯

add a comment of Spirulina, better powder or tablet supplement? All the differences