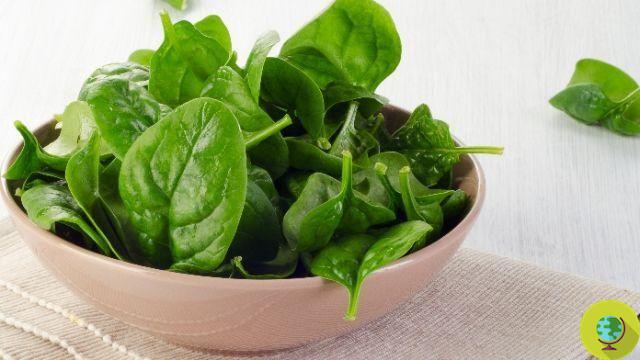 Not only does spinach make you stronger, it also makes you more snappy. According to research, our reflexes, in fact, would benefit a lot from these precious vegetables


Not just the spinach make you stronger, but also more responsive. Our reflexes, in fact, would benefit a lot from these precious vegetables.

So, if Popeye had a good deal of clarity and quickness in his gestures, as well as a Herculean strength, he always owed it to a jar of ready-made spinach. According to one search In fact, eating spinach makes it as fast as light at the University of Leiden, in the Netherlands.

The merit is ofamino acid Tyrosine, which, by the way, is also found in eggs and chicken.

I study - Directed by the psychologist Lorenza Colzato and published in the magazine Neuropsychology, the research started from the consideration that the tyrosine it is the basis for producing two important neurotransmitters in the brain, the dopamine and norepinephrine.

To come to the conclusion that this amino acid is important for i reflexes, the researchers subjected two groups of volunteers to tests, giving one group a fruit juice enriched with tyrosine and the other a juice with a placebo substance. Colzato and his colleagues then created a situation where test candidates had to stop an activity repetitive in a given instant. In fact, the participants were told to look carefully at a computer screen: every time a green arrow appeared, they had to press a button as fast as possible. At the same time they had to make sure that the chosen button had the same direction as the arrow. If, on the other hand, a red arrow appeared on the screen, candidates had to be ready to take their hands off the keyboard altogether.

Well, the results showed that the best candidates, faster and quicker of reflexes, were those who had drunk the juice with tyrosine.

Where is tyrosine found? The richest foods of this amino acid are, in addition to spinach and eggs, also in white meats such as chicken and turkey, soy, hazelnuts, broad beans and some types of cheeses.

- The 10 simplest vegetables to grow in the home garden

add a comment of Spinach makes you more toned and snappy