If you spend a lot of time outdoors, you are doing something good not only for your health, but also for your brain.

If you spend a lot of time (even a very short time) outdoors, you are doing something good not only for your health, but also for your brain. These are the conclusions reached by some German researchers.


During the pandemic caused by the Coronavirus, walking outside the home has become for many the only leisure activity and the only way to get some physical activity. A recent study conducted by researchers from the Max Planck Institute for Human Development and the Medical Center in Hamburg (Germany) suggests that this habit has a positive effect not only on the body, but also on the brain, and that these benefits are visible even with very short trips outside the home: until now, in fact, it was mistakenly thought that being outdoors could have positive effects on our well-being only if we allowed ourselves a lot of time outside the home.

The researchers observed 6 healthy, middle-aged volunteers over a six-month period and monitored their brain activity using the MRI mechanism (more than 280 total checks were performed during the study). In addition to monitoring the time they spent away from home, the researchers asked the volunteers to provide information on their caffeine consumption, sleep hours, daily water intake and any other physical activity, to see if these factors might altering the association between time away from home and brain benefits. To be able to include seasonal differences, the amount of hours of light to which volunteers were exposed was also taken into consideration as a study parameter.

MRI images showed that spending time outside the home had positive effects on gray matter, particularly on dorsolateral prefrontal cortex - an aria involved in the planning of actions is connected to cognitive control. Positive results persist even when other factors that could explain the relationship between time away from home and brain structure are held constant, and the researchers were able to provide statistical calculations to examine the influence of hours of light, number of hours of leisure time, physical activity and water intake to these results: it was found that spending time outside the home has a positive effect on the brain beyond other factors that could influence its benefits. 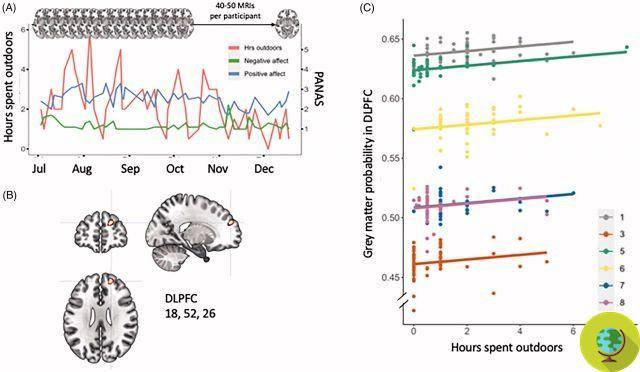 Furthermore, these results support the already convincing ones of studies on positive effects that walking has on human health and also extend them to specific brain health. Since many psychiatric problems are associated with deficits in the prefrontal comma cortex, this study is of particular importance in the field of psychiatry.

Transform bar: in New York the wheatgrass juice grown in the kiosk ❯