Spaghetti squash, what it is, how to cook and where to find nutritious squash like wheat 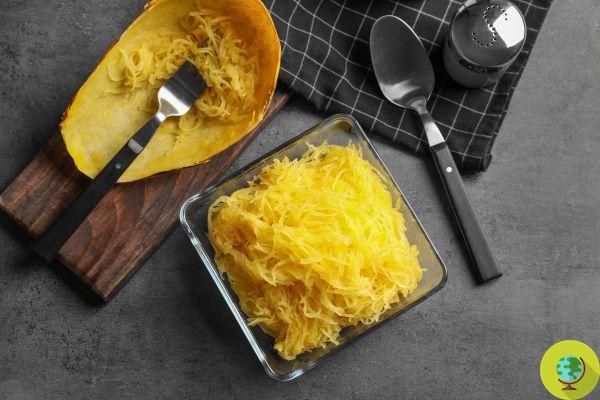 Spaghetti squash is a squash from whose pulp you get gluten-free spaghetti with a low calorie and carbohydrate content.

La spaghetti squash it is a pumpkin from whose pulp filaments similar to traditional spaghetti are obtained, but less caloric, with a lower carbohydrate content and naturally gluten-free.

Spaghetti squash: what it is and nutritional values

La spaghetti squash, also known as squash squash and spaghetti pumpkins, is the fruit of a plant native to South America and belonging to the Curcubitaceae family.

It is a yellow, oval-shaped pumpkin that features a particularity unusual compared to other pumpkins.

The pulp of the spaghetti squash, in fact, if scraped with a fork after cooking, produces some long strands looking similar to thin spaghetti, hence the common name of the vegetable.

Unlike wheat spaghetti, however, those obtained from spaghetti squash have a lower carbohydrate content, they bring fewer calories and obviously they don't contain gluten.

For this they are particularly appreciated by those who follow low calorie and low carb diets, as well as by people with celiac disease.

Il flavor it is neutral and delicate and is reminiscent of potatoes, so spaghetti squash is a versatile vegetable in the kitchen and can be cooked and enjoyed in many ways.

How to cook spaghetti squash

La spaghetti squash it can be cooked in boiling water, in the oven or in a pressure cooker, whole or cut in half, without removing the outer skin.

cook the whole pumpkin, it is necessary to make 15-20 holes on the surface using a pointed knife, to prevent the internal pressure from causing the pumpkin to explode during cooking.

If, on the other hand, the pumpkin is cut in half, the seeds and internal filaments must be removed before cooking.

I cooking times are about 45 minutes in boiling water or in the oven at 180 ° C, which are reduced to 25 in a pressure cooker. Cooking can vary according to the size of the pumpkin, which is ready when the skin is easily pierced with a fork.

After cooking, the pumpkin must cool for about ten minutes, after which it can be cut in half and proceeded to scrape the pulp with a fork to get the "spaghetti".

- pumpkin spaghetti they can be sautéed in a pan with oil, garlic and chilli, or seasoned with oil, salt and pepper or with sauces and served in the peel of the pumpkin.

La spaghetti squash it can also be consumed stuffed and baked au gratin or cut into cubes or slices and cooked in the same way as potatoes or other pumpkins.

Where to buy spaghetti squash

Spaghetti squash is not a common food in our culinary tradition and finding it on the market is not easy. It's possible find the spaghetti squash in well-stocked fruit and vegetable shops or, possibly, you can order it from your trusted shopkeeper.

Alternatively, gardeners can purchase spaghetti squash seeds and grow the squash in their own land.

add a comment of Spaghetti squash, what it is, how to cook and where to find nutritious squash like wheat