Somniloquy: what it is and why it is spoken in sleep 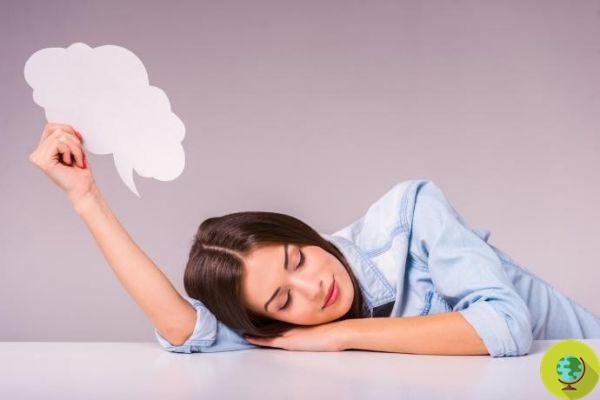 Somniloquy: Some people may occasionally speak while they sleep. But why does this happen?

Somniloquy: Some people may occasionally speak while they sleep. But why does this happen?


Talk about sleep: has this ever happened to you? If you are near someone who talks in their sleep, you literally jump in terror. A voice that suddenly emerges in the darkness of the night and that also says things that seem senseless. Some people, alas, can happen to talk while they sleep. But why does this happen?

Well, it is a question to which science still does not know how to give a precise answer, but several hypotheses have been formulated, some of these attributable to the presence of pathologies at an early stage. But fear not, it shouldn't be a major problem.

What is certain is that to "suffer" from somniloquy (or sleep talk) seem to be mainly children and adults in a particular state of stress or feverish.

What is sleep talk

It would be a normal one manifestation of the nocturnal activity of the brain that, as we well know, it never "falls asleep" completely but is in continuous activity. This also leads to formulating unconscious thoughts which, in some cases, lead to speak aloud and also to say sentences with complete meaning, regardless of whether you are dreaming or not.

Speaking in sleep is very common in children, who have not yet developed coordination between the brain centers that control language and the muscles of the face.

However, it can happen that even the adults talk in their sleep and it seems to be due to particular stressful conditions particular or even a simple fever.

In general, the somniloquy is therefore the symptom of excessive physical and mental fatigue, it is not considered a real disease but it can be the symptom of some neurological pathologies or other sleep disorders such as bruxism, sleep terror (fear of falling asleep) or obstructive sleep apnea.

Sleep: how and how much to sleep. Tips for baby sleep

What do you say during sleep?

A French study attempted to decipher what is said in the sleep phase.
On a sample of 232 volunteers afflicted by parasomnia (sleep disturbances that also lead to talking in their sleep) willing to sleep for two consecutive nights in the laboratory, the researchers conducted a polysomnography, a test that evaluates all parameters related to sleep. .

In this way, the researchers recorded 883 episodes of speech in sleep: 59% of the episodes were attributable to mumbling, screaming, laughing and whispering, while they also managed to pick up 3349 intelligible words. Those who spoke the most were men and the most spoken word was "no", or in any case denials and then questions. 10% of the words spoken were found to be insults, generally not addressed to an unidentifiable interlocutor.

Why do we talk in sleep?

From that research it also emerged that the somniloquy is more frequent in people who experience a conflict situation in life and that when speaking in sleep the same brain circuits are used that during the day allow to respect a certain syntax, semantics and to wait. that the interlocutor answers us.

Especially if associated with other sleep disorders, talking while you sleep would be classified according to experts in the category of sleep disorders, in order to establish whether it is an isolated manifestation or not, set a diagnosis and a possible treatment, which does not necessarily have to include drugs.

If stress is the cause that leads us to sleep restlessly and to be big bucks in sleep, what we need is simply a little quiet (at least) in bedtime. Therefore it is advisable:

add a comment of Somniloquy: what it is and why it is spoken in sleep