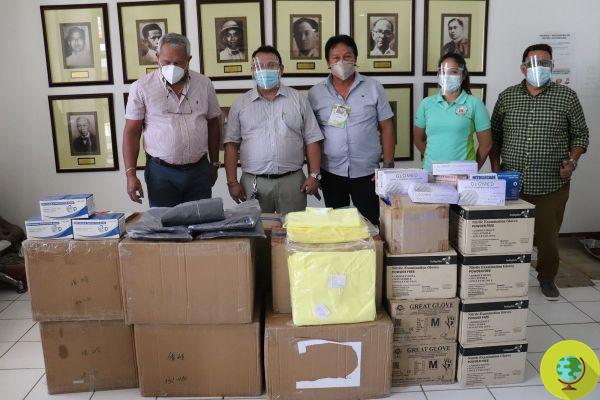 In the Philippines, the tobacco industry has become a "benefactor" of the country. With the complacency of the central government, it provides substantial aid and health equipment for the fight against Covid-19. A "tactic" widely adopted by the tobacco industry to put pressure on government and health institutions, increase profits and increase production despite the pandemic.


On March 26, 2020, as the Philippines recorded 707 cases of Covid-19 two weeks after the national lockdown imposed to curb the spread of the coronavirus, the country's largest tobacco company and its operational arm, as part of the social responsibility of enterprise (RSI), donated hundreds of bags of rice and canned sardines to the governor of the city of Cagayan de Oro, capital of the Misamis Oriental province, in the Northern Mindanao region.

UP TO 201 boxes of face masks; 151 disposable isolation gowns, 65 washable coveralls and 80 boxes of…

The images from the official Facebook page of the city of Cagayan de Oro City, contained in a post dated November 9, 2020, show some local officials, including the mayor of the city Oscar Moreno, displaying the load of donations of masks, disposable insulating gowns and throws, washable coveralls and nitrile gloves offered by the Jaime V. Ongpin Foundation, the CSR arm of the Philip Morris Fortune Tobacco Corporation (PMFTC).

RSI of the tobacco industry: the Philippine case

PMFTC is the Philippine subsidiary of tobacco giant Philip Morris International, which has a market share of around 70% in the country. PMFTC's Philippine market brands, the result of a joint venture with Fortune Tobacco Corporation, are Marlboro and Fortune. Fortune Tobacco Corp is owned by the Sino-Filipino tycoon's LT Group pike tan.

JVOFI's corporate social responsibility (CSR) initiatives had been justified by pressing demands made by the Philippine government, which sought private sector support to tackle an unprecedented pandemic.

In fact, CSR activities promoted by tobacco companies should be banned; pursuant to Framework Convention of the World Health Organization for the fight against smoking (FCTC), the signatory countries of the agreement, including the Philippines, are required to prohibit all forms of advertising, promotion and sponsorship of smoking.

CSR would therefore constitute an illegal form of sponsorship of the tobacco industry, but there is no law in the Philippines that sanctions the ban. However, there is a 2010 document on the protection of national bureaucracy from interference from the tobacco industry and guidelines, published in May 2020, on tobacco control in consideration of the Covid-19 epidemic.

Pandemic: a new business for the tobacco giants

According to supporters of the anti-smoking campaign, the industrial giants of tobacco, responsible for more than 8 million deaths worldwide each year, would never have assumed any responsibility in the face of serious illnesses and deaths caused by tobacco, ignoring the further damaging social consequences of smoking. and environmental.

According to his detractors, the tobacco industry would have exploited the Covid-19 pandemic of 2020 to donate and provide equipment and resources to the countries most in need and, above all, to show itself as "part of the solution" to the problem of the global epidemic. . By resorting to this tactic, the tobacco industry tries to get closer to national governments in order to interfere with the health policies put in place to reduce tobacco consumption and, in some cases, manage to delegitimize them and even cancel them.

During the pandemic, both Japan Tobacco International (JTI) and the aforementioned PMFTC allegedly lobbied the Philippine Department of Finance for permission to keep cigarette companies open, even though they are non-essential items. For JTI it was a strategy to combat cigarette smuggling.

According to the Global Tobacco Industry Interference Index 2020, the Philippines ranks 19th among the 57 countries included in the world ranking, with a score of 57. An increase of 3 points from the score of 54 in 2019. The lower score indicates less interference from the tobacco industry in the country.