Smoking and suntan age the skin by at least 10 years 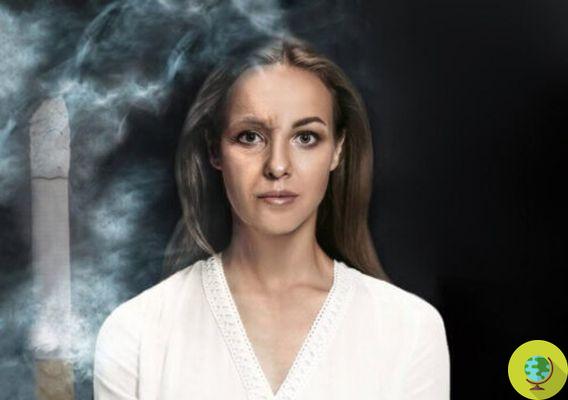 11 years older than the real age. This is what the skin looks like in those who smoke 20 cigarettes a day. According to a study conducted by the University of California School of Medicine in San Francisco, even 35 packs of cigarettes a year together with sun exposure are enough to age brutally 10 years.

11 years older than the real age. This is what the skin looks like in those who smoke 20 cigarettes a day. According to a study conducted by the University of California School of Medicine in San Francisco, they are also enough 35 packs of cigarettes per year along with sun exposure for brutally age 10 years.

The research, which brought together several studies onaging of the skin caused of the smoke, was published in Cosmetic & Toiletries Science Applied. It examined both the intrinsic and extrinsic factors of skin aging, where with iintrinsic aging it refers to the slow permanent degeneration that affects most of the body, with distinguishable characteristics such as wrinkles, the angiomas and seborrheic keratosis. In a certain sense, these are natural factors, linked to the passage of time.

Photoaging or photodamage are, on the other hand, the most evident effects ofextrinsic skin aging, caused by long-term exposure to UV rays and smoking. Photo-damaged skin shows noticeable wrinkles, blemishes and is often associated with malignant tumors. Smoking is also an extrinsic factor in skin aging, as documented by several studies.

Combined, smoking and sun exposure are detrimental to skin health as well as its appearance. In reality, today, multiple environmental factors are associated with facial aging but it is study proved that smoking 20 cigarettes a day it is equivalent in all respects to 10 years of “chronological” aging. At the same time, smoking 35 packs of cigarettes a year, about 3 per month, and exposing yourself to the sun for two hours per day the risk of premature aging is 11,4 times higher than non-smokers and those who take less exposure to UV rays.

How to get rid of vices and bad habits

Smoking in pregnancy: insured asthma for children and grandchildren ❯