Smartphones: teens at risk of insomnia 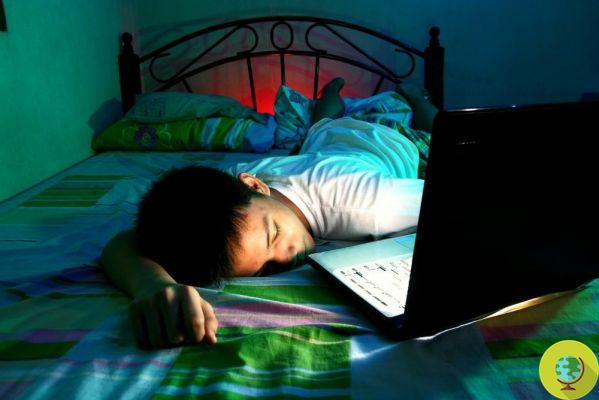 Today's youth spend so much time fiddling with cell phones that they suffer from real sleep disorders. And not only.

Smartphone Insomnia: Today's youth spend so much time fiddling with mobile phones that they suffer from real sleep disorders. And not only that: exposure to drugs also threatens the regular growth of our adolescents.


This is what Claudio Mencacci, Director of the Department of Neuroscience and Mental Health of the ASST FBF-Sacco of Milan affirms, author, together with Gianni Migliarese, psychiatrist of Fatebenefratelli, of the book “When everything changes. Psychic health in adolescence "(Pacini Editore).

Under accusation comes the so-called "technological insomnia", which undermines the brain development of young children, and the new addictions of those to substances that continue in ever new form to threaten teenagers.

“The new 'invisible' drug has a thousand sources:“ Internet, smartphones, gambling, social networks, pornography, online and non-online video games - says Mencacci. There are so many forms of this growing dependence on technology. Some have become famous: nomophobia (fear of being disconnected), Fomo (fear of being cut off from social media), ringxiety (smartphone anxiety), textiety (message anxiety), vamping (nighttime hours spent on social media) ".

A list of frightening words and almost unknown to us old recruits, a series of conditions that we can no longer see and that indicate to us that teenagers need help to find valid points of reference for their positive growth. We have all had age-related anxieties, but what emerges from this generation is that today's kids are no longer looking for answers in parental figures but from social networks.

"Our teenagers live through a difficult transition: they have little past, an uncertain present and a future of which there is no trace, in essence they are navigating in a new universe without maps, 'in sight'."

And what unites them is a constant state of alert, day and night.

What does all this lead to? TO trough, as Mencacci affirms, to a real imbalance in brain chemistry, as claimed by a research from the University of Korea and to what is called the "first killer" of the young brain: the lack of sleep.

“At 18, 75% of children sleep less than 8 hours, 10% sleep less than 6 hours. It begins as a child, with increasing exposure to stimulants. A study shows that insomnia is present in 10% of cases. And sleep deprivation, especially if chronic, has consequences. The time spent awake affects the number of synapses that form or are eliminated in the teen's brain. There is difficulty in managing situations of adaptation to increasing stress, even the dynamics of anxiety and depression are closely linked to the quantity and quality of sleep ".

Obviously, the lack of rest leads to "cognitive consequences" which, according to the data of the experts, are then also increased by the use of substances, such as cannabis and new psychoactive substances.

Addiction to video games, smartphones and tablets: it is an alarm for children and adolescents

For the rest? Many do not practice a sport, many others use the PC as early as 14 and 10% of the 8 million and 200 thousand young people between 12 and 25 say they are dissatisfied with their life.

What is the solution? Probably each parent knows her intimately. It is only necessary to understand that adolescence “is not only a phase of psychological transition, but of indispensable neurobiological changes. It is one of the periods in which plasticity is greater: there is a huge operation of remodeling of the brain organization, there are phenomena of synaptic thinning, a process that aims to form connections at high speed ”, explains Gianni Migliarese.

Are you sure that leaving them alone with their smartphone makes them happy and satisfied young people? Let's take the reins back in hand and let them grow adults with wits and brains!

Smartwatch and hypertension: soon your Fitbit will also calculate your blood pressure and the elasticity of your arteries ❯

add a comment of Smartphones: teens at risk of insomnia