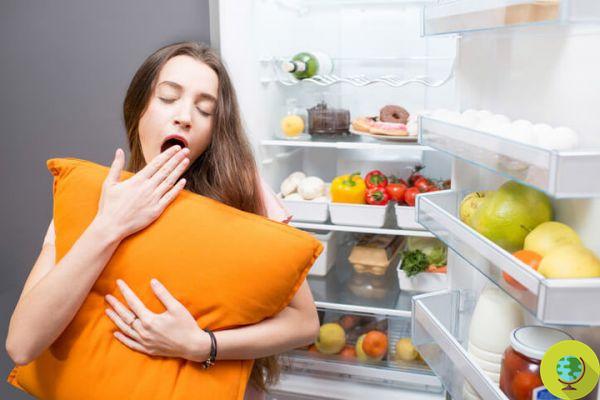 Usually we talk about how nutrition can affect sleep at night. Now, however, new research turns the perspective upside down by investigating how getting enough sleep can affect our relationship with food.

Usually we talk about how nutrition can affect sleep at night. Now, however, a new research turns the perspective upside down by investigating how get enough sleep is able to influence our relationship with food.


Do you want to eat better? Get more sleep. This is the result of a study conducted at King's College London and published in the American Journal of Clinical Nutrition. Increasing the amount of sleep has in fact been linked to eating fewer sugary foods and making better nutritional choices.

The research team sampled 42 volunteers who slept less than the recommended minimum of seven hours each night. Half of the participants received advice on how to sleep more, such as avoiding caffeine before bed, establishing a relaxing routine, and trying not to go to bed too full or otherwise hungry. These tips were intended to help people increase their total sleep amount by 90 minutes per night. The remaining 21 volunteers had not received any advice to improve their night's rest.

At the end of the experiment, the team found that of those who followed the advice, 86% had spent more time in bed and about half had slept longer than before. These extended sleep patterns have been associated with an average reduction in sugar intake of 10 grams per day. It was also found that people who slept more also ate fewer carbohydrates overall. There were no significant changes in the diet of the control group.

"The fact that extending sleep has led to a reduction in free sugar intake suggests that a simple lifestyle change can really help people eat healthier diets," said Dr. Wendy Hall of the research team.

“We have shown that sleep habits can be changed relatively easily in healthy adults using a personalized approach. Our findings also suggest that increasing bedtime by an hour or more can lead to healthier food choices. This further strengthens the link between short sleep and lower quality diets that has already been observed in previous studies. "

The results therefore strengthened the link between lack of sleep and a poor quality diet. But as the doctor rightly points out, this isn't the first study linking sleep to diet. A 2011 survey, for example, followed over 1500 middle-aged people for six years and found that those who became obese during that time slept an average of 6,3 hours a night, compared to 7,2 hours for those who were. managed to maintain a healthier body weight.

On the relationship between sleep and diet, you may also be interested in:

Among the many advantages of a good restful sleep we can therefore also include the positive effect on the food we choose to eat every day.

Sleeping less than six hours a night may increase the risk of cardiovascular disease, the study ❯

add a comment of Sleeping more makes you eat better