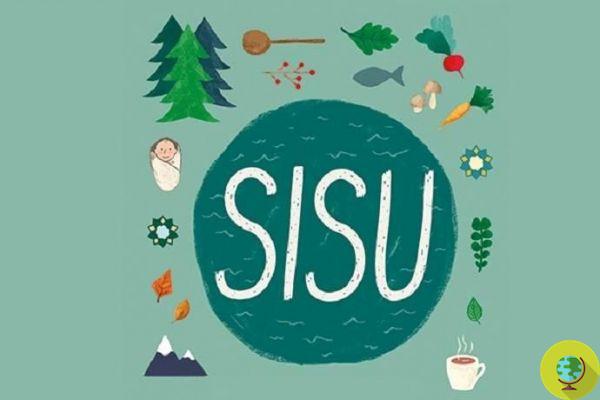 In Finland, sisu is a kind of daily courage, grit, determination that helps to face the challenges, small or large, that life throws at us. It is therefore not the pursuit of happiness that appears to be an ephemeral moment, but rather of well-being.

In Finland, sisu is a kind of daily courage, grit, determination that helps to face the challenges, small or large, that life throws at us. It is therefore not the pursuit of happiness that appears to be an ephemeral moment, but rather of well-being.


Katja Pantzar, journalist and writer, in the book Sisu The Finnish way to courage, well-being and happiness tells how, thanks to sisu, she defeated her depression and charged with a new energy and reveals to the reader the secrets of this magical Nordic "art".

The word sisu does not have a literal translation but it teaches us perseverance in the face of adversity and contains different meanings. Pantzar talks about the benefits of woodland therapy and winter swimming to cure stress, the power of the sauna to nullify social differences, the infinite resources of DIY to recycle objects creatively.

In this way, immersion in nature, simplicity, do-it-yourself end up expressing themselves in small daily acts, within everyone's reach, which prove to be essential for the body and spirit.

We could therefore say that sisu is an attitude of resilience that we could and should always adopt, a sort of philosophy of life to follow every moment.

The word sisu has distant roots. On November 30, 1939, the Soviet Union declared war on Finland, 105 days of the so-called Winter War in which the Finns seemed to have no hope against the Russians.
The Russian army in addition to soldiers had powerful military means, unlike Finns they were few and without a winning apparatus. It is said that it was just then that the word sisu was first pronounced as a source of courage and determination.

What happened is history: the Russians fell for the winter and the inability to orient themselves in the snow, but surely the positive attitude of the Finns did its part.

We too can embrace sisu in our daily lives by practicing the five components: perseverance, stress management, resilience, honesty and setting concrete goals.