Side effects of ibuprofen: the 5 signs that warn of a possible stomach ulcer 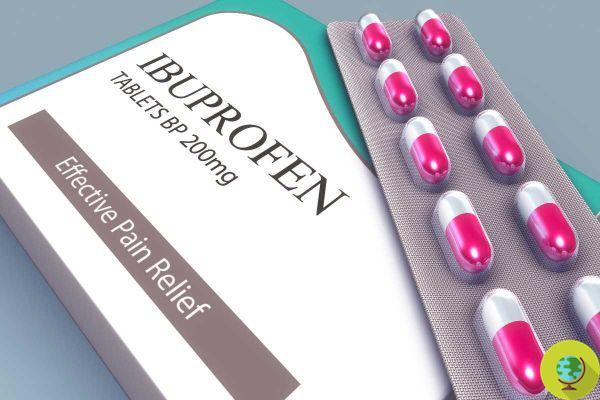 Ibuprofen is one of the most widely used drugs to relieve pain, inflammation and flu states. Let's find out what are the signs not to be underestimated of a very serious side effect related to ibuprofen.

Ibuprofen works by reducing hormones that cause pain and swelling. Also used in combination with others painkillers in cold and flu remedies, is a varied and multipurpose drug. Just like the others, however, it can have a number of serious side effects. (Read also: The FDA warns of the risks of anti-inflammatories and pain relievers such as ibuprofen)


This drug falls under the so-called NSAIDs, i.e. anti-inflammatory drugs, which in addition to ibuprofen include aspirin, naproxen and diclofenac. It is good to stop the administration and undergo a medical check-up in case of difficulty in breathing, severe headache, high fever, stiff neck, discomfort from bright lights, blurred vision and hallucinations.

Among others severe side effects of ibuprofen warning of a possible stomach ulcer, we also point out:

The side effects of medicines, as well as of ibuprofen, if not reported on the package leaflet, must necessarily be reported to AIFA. As for ibuprofen specifically, the side effects are not just limited to the short term, as Constant use of the pain reliever over a prolonged period can cause long-term harm, such as the development of ulcers in the stomach or intestines.

Also called a gastric ulcer, this is a sore right in the lining of the stomach, the presence of which could cause one burning sensation immediately after eating. This discomfort can last from a few minutes, making it barely noticeable, to a few hours. Another sensation that might arise is the nausea, usually accompanied by vomiting in severe cases, and loss of appetite; as a result, it is not uncommon for a person with an ulcer to lose weight.

Once diagnosed by gastroscopy, especially if caused by taking NSAIDs, the patient may be given a course of proton pump inhibitors (PPIs). An alternative drug, on the other hand, could be H2 receptor antagonists, as well as antacids to relieve symptoms. It may take up to six weeks to heal, and the recovery process can be encouraged by some factors as:

Overall, ibuprofen is a safe drug, but not without its dangers; just think that every year various data are collected on the effects it can have on our organism.

Side effects and things to know before taking maca powder ❯

add a comment of Side effects of ibuprofen: the 5 signs that warn of a possible stomach ulcer