Serotonin: what it is and how to stimulate the happiness hormone

Serotonin is also called the hormone of happiness and good mood. What is it? How does it affect our body and is it possible to increase the release? What are the symptoms of a deficiency?

La Serotonin it is also called the hormone of happiness and good humor. What is it? How does it affect our body and is it possible to increase its release? What are the symptoms of a deficiency?


La Serotonin it is a neurotransmitter synthesized mainly in the gastrointestinal tract and in the central nervous system. It performs numerous functions and intervenes in the regulation of important physiological processes such as the sleep / wake cycle, the sense of hunger / satiety, intestinal motility, mood, memory and sexual desire.

It is best known for being therehormone responsible for good humore : the more serotonin we have in circulation, the greater our degree of fulfillment, satisfaction and psychophysical well-being. For this reason, serotonin is also known as "Hormone of happiness". 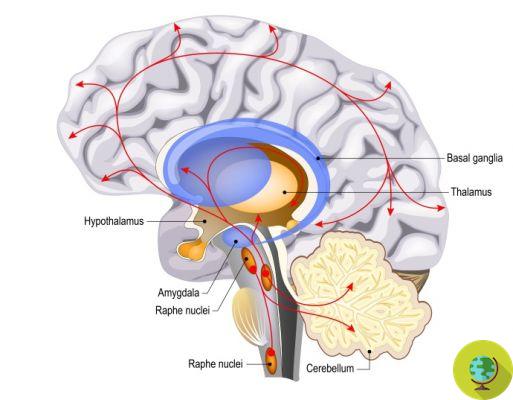 Schematically, the main functions of serotonin are as follows:

1) in the gastrointestinal tract:

2) in the central nervous system:

3) In platelets and plasma: exerts a vasodilatory action, lowering blood pressure. Insufficient levels of this hormone cause hypertension

How to stimulate the production of serotonin

The production of serotonin is a natural physiological process, activated by nerve receptors in the gastrointestinal tract and central nervous system. However, the secretion of this very important hormone mediator can be stimulated in various ways, including the intake of certain foods, the use of herbal remedies, the regular practice of physical activity, exposure to sunlight, massages, sex. , socialization, yoga and meditation.

The precursor of serotonin is the tryptophan, an essential amino acid, which is not produced by our body, but needs to be introduced through food. It should be noted immediately that not all foods with a high content of tryptophan automatically produce serotonin, since the latter, in order to be synthesized by our body, needs the presence of carbohydrates, iron and vitamins of group b.

Therefore, by taking, for example, considerable quantities of turkey, a food very rich in tryptophan, we will not automatically raise serotonin levels.

Foods rich in B vitamins

It is of fundamental importance to privilege the foods rich in vitamin b, including milk, fish, whole grains, legumes, honey, citrus fruits, some vegetables (endive, spinach, potato, cabbage, asparagus, tomatoes, mushrooms, chard, lettuce), bananas, papaya, pineapple and avocado. Vitamin B2 and B6 as well as iron and carbohydrates facilitate the absorption of tryptophan by our body.

All sugar-rich foods have the ability to increase serotonin levels in the central nervous system. The introduction of sugars causes the production of insulin, a hormone that favors the penetration of nutrients into the cells, with the exception of tryptophan.

Unlike the other amino acids, tryptophan is not absorbed and remains in the bloodstream, thus being easily assimilated by the central nervous system. This mechanism explains why sweet foods are capable of producing serotonin, increasing good mood and general well-being. For this reason, when we feel low in mood or maybe we are stressed or worried, we crave chocolate or other foods rich in sugar, not surprisingly defined as "comfort foods". The intake of sugars determines a hyper production of insulin, which tends to lower the blood sugar level to bring it below its physiological levels, causing a situation of hypoglycemia and therefore the desire to ingest other sugars.

In practice, the insulin reaction determined byhyperglycemia it triggers a vicious circle, as it leads to a rapid metabolization of sugars, again generating the desire to ingest sweet foods. In this way, in the long run, serotonin favors the onset of metabolic syndrome, predisposing to type II diabetes.

To satisfy our need for serotonin, without running the risk of gaining weight or developing even serious diseases, it is preferable eating low-calorie but tryptophan-rich foods, such as fruit, or complex carbohydrates such as i cereals integral. The so-called complex carbohydrates, in fact, prevent the so-called 'glycemic peak' from occurring, since they release sugars gradually, preventing excessive insulin production in the blood and breaking the typical vicious circle represented by the following scheme:

Having made these necessary premises, let's see schematically what the foods higher in tryptophan:

Among the plants that favor the raising of serotonin levels in the central nervous system, the best known is certainly griffonia. It is a legume native to the tropical areas of Central West Africa. Its very high tryptophan content makes it particularly suitable as a remedy to counteract low levels of serotonin, associated with depressive disorders and anxious states.

Read also: Griffonia: properties, CONTRAINDICATIONS and how to take the natural antidepressant

Another plant capable of stimulating the serotonin content is the Spirulina, a blue alga that lives in the brackish waters of tropical and subtropical areas. It contains a very high percentage of tryptophan, an amino acid precursor of serotonin, which in turn is a precursor of melatonin. For this, taking spirulina improves mood and promotes a feeling of calm and happiness.

Read also: Spirulina algae: properties, uses and where to find it

With its fragrant yellow flowers, the rhodiola it grows spontaneously in mountain areas. It has numerous therapeutic properties, including the ability to increase serotonin, relieving fatigue and stimulating the immune system. For this reason, Rhodiola is well known as a natural antidepressant.

Read also: Rhodes: properties, uses, CONTRAINDICATIONS and where to find it

Also hypericum (or St. John's wort) is a herbal remedy capable of raising serotonin levels in the central nervous system. Unlike griffonia, spirulina and rodiola, all characterized by a high content of tryptophan, St. John's wort is able to inhibit the reabsorption (reuptake) of serotonin.

At the level of the central nervous system, in fact, part of the newly released serotonin interacts with the receptors, while the excess is reabsorbed. St. John's wort behaves exactly as antidepressant drugs do, so-called SSRI (Selective Serotonin Reuptake Inhibitors), preventing the reabsorption of this hormone and promoting its release, in order to promote a feeling of general well-being.

Read also: Hypericum: all the properties, benefits and contraindications of St. John's wort

Other methods of stimulating serotonin

Serotonin is a very important neurotransmitter, the deficiency of which can lead to the onset of even serious pathologies, such as depression, obsessive-compulsive disorder, anxiety attacks and panic attacks. Normally it can be integrated through a balanced diet and a correct lifestyle, but sometimes that's not enough.

In severe cases, a serotonin deficiency can even cause the onset of Fibromyalgia, a disease characterized by pain and perennial muscle tension, at the origin of stiffness and difficulty in movements.

We then resort to the administration of antidepressant medications, able to stimulate the production of this very important hormonal mediator. There are many types, from the 'old' tricyclics to those of the latest generation, but essentially the action they perform is always the same: these substances are able to inhibit the reuptake (reabsorption) of serotonin. At the level of the central nervous system, once released, part of the serotonin interacts with the receptors, while the excess is reabsorbed. These drugs, called SSRIs (Selective Serotonin Reuptake Inhibitors) work by blocking its reabsorption and enhancing its release.

Uno over or under imbalance in serotonin levels it can have very negative consequences. As mentioned, low serotonin levels cause depression, anxiety, panic attacks and, in extreme cases, cause fibromyalgia. But an excessive level of serotonin in the circulation, caused by the prolonged intake of antidepressant drugs, can also have negative effects on health.

Is called serotonin syndrome and its symptoms include headache, hallucinations, behavioral disturbances, agitation, confusion, tremors, muscle twitching, chills, rapid heartbeat, sweating, nausea, and diarrhea. In concomitance with at least three of these symptoms, drug treatment should be stopped immediately, taking serotonin antagonists. Generally, after the first 24 hours, there is a rapid remission of the disorder.

For all these reasons, serotonin still remains a fundamental hormone, much studied by researchers who in recent months have added a fundamental piece to the knowledge of this neurotransmitter, managing to reconstruct how it works at the level of neuronal circuits, but there is still much to be done. studying especially to better understand diseases such as depression or obsessive-compulsive disorders.

Other hormones essential for our mood:

Serotonin: If you have any of these 10 signs you may have low levels of the happiness hormone ❯

add a comment of Serotonin: what it is and how to stimulate the happiness hormone