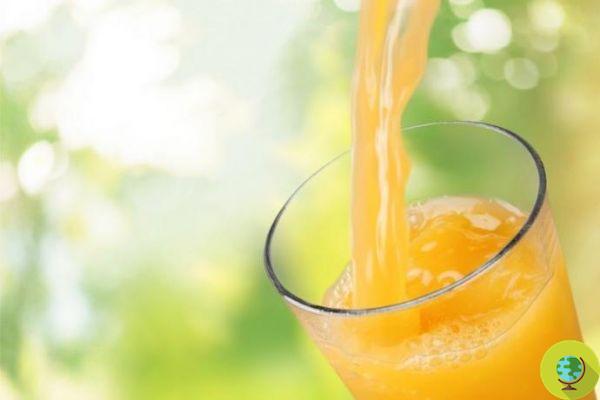 Orange juice, a tasty and healthy drink, also useful for our brain. According to new research, drinking the juice can reduce the risk of senile dementia in the elderly by nearly 50%.

Orange juice, a tasty and healthy drink, also useful for our brain. According to new research, drinking the juice can reduce the risk of senile dementia in the elderly by nearly 50%.


Dementia, which affects a certain number of people over the age of 65, is a disease that is characterized by a progressive deterioration of one's cognitive functions (thinking, reasoning, knowledge), personality and intellectual functions.

A disease for which there is currently no cure and for this reason scientists are still looking for a useful treatment to stem the problem. What is certain, however, is that you can act in prevention and it is now established that a diet rich in fruit and vegetables can lower the risk of finding yourself struggling with dementia.

Now a new study, published in the journal Neurology, found that men who drink a glass of orange juice every day are 47% less likely to have difficulty remembering, following instructions or turning to familiar areas.

The research, conducted by Harvard University, sampled nearly 28 men, monitored and studied for 20 years, in particular examining how their consumption of fruit and vegetables affected their personal brain abilities. Study participants answered questionnaires about what they ate every four years. The researchers then classified the men (mean age 51 at the start of the study) into five groups based on their consumption of fruit and vegetables.

To measure how fruit and vegetable consumption affected brain health, the researchers tested participants (when they were 73 years old on average) for their thinking and memory skills. In tests, men were asked to remember recent events or items on shopping lists.

Consumption of fruit, on the whole, does not seem to influence the risk of cognitive problems but drinking orange juice does.

As the lead author of the study, Changzheng Yuan, argues, long-term intake of vegetables, fruit but especially orange juice "can be useful" for maintaining cognitive function.

The new study therefore provides support for the importance of a healthy diet to ward off brain degeneration that comes with advancing age.

According to Dr. Hannah Gardener, a researcher at the University of Miami, who was not involved in the research, fruits and vegetables are rich in vitamins and nutrients, including antioxidants, which can help protect the brain.

However, experts remember that you should not exceed in the consumption of orange juice or juice as it is rich in calories from concentrated fruit sugars. It is therefore advisable not to consume more than one glass per day.

Dementia: higher risk if you have high blood pressure and diabetes ❯

add a comment of Senile dementia: to prevent it, drink orange juice!