Sea lions and seals: canned meat for sale in Japan 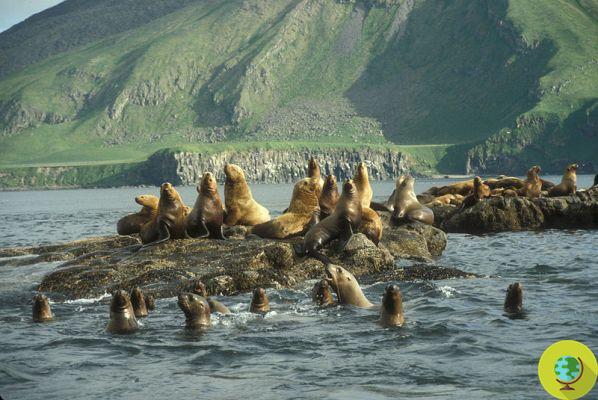 Does Japan love marine mammals? It seems so, but only when these become food for men. In addition to the dolphin hunt, which takes place in the now infamous Taiji bay, and the whale hunt, disguised with phantom scientific purposes, it seems that in the Asian country the meat of sea lions and seals, two endangered species of 'extinction.

Does Japan love marine mammals? It seems so, but only when these become food for men. In addition to dolphin hunting, which takes place in the now infamous Taiji bay, and to that of whales, disguised with phantom scientific purposes, it seems that in the Asian country also the meat of sea ​​lions and seals, two endangered species.

Government sources estimate that different hundreds of specimens are eaten every year, although it is not clear exactly how many individuals are killed. According to Greenpeace, there are only about 85.000 Steller's sea lions in the North Pacific. There species is endangered in Alaska, and the International Union for Conservation of Nature (IUCN) put them on its red list. “Steller's sea lions were among the most widespread marine mammals until their rapid decline in the early 80s. The reasons for the decline are not known, ”explains the environmental association.

To find out one of the probable reasons, perhaps it would be enough to open a jar with the can opener. The sea lions and the seals that come hunted and killed off the coast of Hokkaido, Japan, they end up as food in tin containers at gift shops and on sites like Rakuten, Amazon Japan, e Yahoo!. There, shoppers can find these ocean animals topped with curry sauce.

"There are tourist shops that sell canned sea lions, but I would not like this choice of souvenirs to be considered the most popular", said to Vice News Masahide Obura, spokesperson for the Hokkaido Prefecture Food Industry Bureau. Selling this meat can actually be an easy way to gearn money after slaughtering animals carried out primarily to prevent them from interfering and competing with Japanese fishermen.

The sea lions, in fact, are thearchenemy of fishermen. Perhaps this is also why in Hokkaido they have become a delicacy cooked in the traditional Japanese way, with ginger, miso, and sugar. Thus, for as little as ¥ 735 (about $ 7, you can enjoy the salty meat of this male competitor in fishing.

Funds from tsunami and Fukushima used for whaling

Taiji 2013: what they don't want us to see about dolphins

Lepsis: the terrarium for raising edible insects at home ❯

add a comment of Sea lions and seals: canned meat for sale in Japan