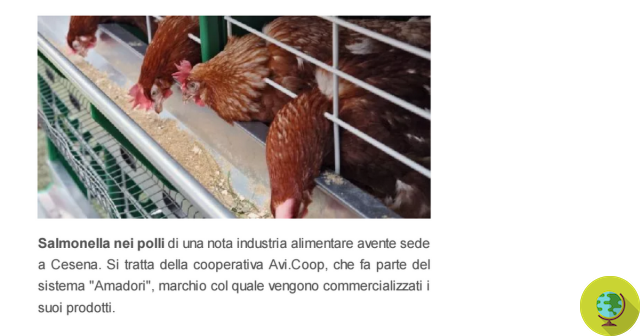 Salmonella in chickens from a well-known food industry based in Cesena. This was brought to light by the "Hell's chicken" operation of the NAS Carabinieri of Bologna, which notified the notice of conclusion of investigations against six veterinarians of the AUSL of Cesena and two executives

Salmonella in chickens of a well-known food industry based in Cesena. This is the Avi.Coop cooperative, which is part of the “Amadori” system, the brand under which its products are marketed.

The operation brought it to light "Hell’s chicken”Of the NAS Carabinieri of Bologna, which notified the notice of conclusion of investigations against six veterinarians of the AUSL of Cesena and two executives.

The investigation activity, coordinated by the Public Prosecutor's Office of Forlì and conducted by the Anti-Sophistication and Health Unit of Bologna, was developed following a series of checks carried out by the NAS at the industry and at the marketing chain, on food products of poultry origin placed on the market and which had revealed repeated irregularities for the constant presence of the salmonella bacterium in finished products.

Hence a lack of management management of the establishment emerged and suspicions arose about the surveillance and control activities of the public veterinary office. The investigations revealed an irregularity in the conduct of industrial activity, but also non-fulfillment and violations against the various veterinarians public in charge of health control and supervision.

Particularly have been ascertained: false ideology in public documents, having the public veterinarians falsely attested to having carried out control and sampling activities in fact not carried out personally, abuse of office and omissions in official documents, not having proceeded with the adoption of necessary health measures and indispensable for the consumer health protection and, finally, failure to notify the AG of facts constituting a crime.

The company, for its part, is not there. And he replies:

"The investigations concern the methods of carrying out sampling checks carried out by veterinarians on behalf of the Ausl and there is no charge regarding the presence of salmonella in our products. In any case, the company declares its willingness to collaborate, today as in the past, with the judicial authority for any type of verification, trusting in the undisputed seriousness of the investigations in progress and having always operated in full compliance with current health legislation. , guaranteeing the quality and safety of its products in the interest of consumers ".

But can we really be sure? What's really in the dishes we bring to the table?

BREEDING OF HENS SUBJECT TO VARESE. THE VIDEO CHOC OF ANIMAL NEMESIS

add a comment of Salmonella in chicken meat: 6 veterinarians investigated and an Amadori supplier involved