Salmon: 10 good reasons not to eat it 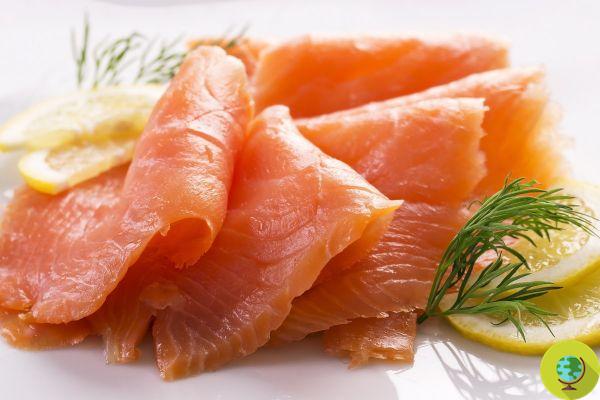 Is salmon from factory farms really healthy and safe for our body?

Il salmon coming from intensive breeding is it really healthy and safe for our body? Farmed salmon could be exposed to toxic substances and heavy metals, as well as being fed dyes or animal by-products enriched feed. In addition, the consumption of salmon by pregnant women it could put the baby's brain development at risk. Here are some points that deserve further attention.

How do you explain puresalmon.org, intensive salmon farming serenades a large amount of biological, organic and inorganic waste materials. In the bottoms of the farms, tons of waste would be deposited, excrement e waste substances. As he points out Alexandra Morton, the nets would never be cleaned. It would be as if you never replace your cat's litter box. In short, hygienic conditions in intensive farming would not be perfect at all.

Le precarious hygienic conditions of intensive salmon farming would lead to a greater spread of pathogens, up to supermarkets and our tables. In this regard it is interesting to read a scientific article published in the US National Library of Medicine as regards the evolution of pathogens in intensive farming in Finland. Further details in a document of theEFSA.

A US scientist, after studying the toxins present in farmed salmon, told the media that each of us should avoid eating salmon like the plague. The study in question was published in Science and bears the title of "Global assessment of Organic Contaminants in Farmed Salmons". THU you will find an interesting study on contamination from dioxin farmed salmon, with particular reference to Atlantic salmon.

As reported by Natural News, 95% of Atlantic salmon sold in grocery stores would come from factory farms and the vast majority would be subjected to artificial coloring to make it more similar in appearance to wild salmon. The dyes would be added directly in the feed fed to salmon on farms. Further confirmations on the use of artificial colors come from Pure Salmon Campaign.

In 2013 Norway would have gotten the consent of the European Union to increase the dose of endosulfano in feed intended for farmed salmon. It is a pesticide banned in many parts of the world due to its danger to human health. THU more information on endosulfan. THU an in-depth study on the case of Norway.

Is the feed given to salmon in factory farms really safe and suitable for their species? According to what reported by Render Magazine in some cases the feed for farmed salmon could contain protein derived from by-products of animal origin. There is also the doubt that farmed salmon fed with animal derivatives from pigs cannot be considered Kosher.

Intensive salmon farming endangers the survival of some marine animals, such as seals, and volatili ei Sea lions, which often risk being trapped in the nets that surround the farms. In Canada the most massive phenomena would specifically concern sea lions, as reported by the Vancouver Sun.

The consumption of salmon from intensive farming is a luxury that affects only a small part of the world population. The production of farmed salmon it would not be sustainable since they are fed more fish than they will get. More information on Seafood Watch.

Wild salmon would be the subject of a fishing more and more intense, which would be driving the remaining fish stocks towards extinction. One scientific study conducted in the Department of Biology of Dalhousle University has placed in close relationship the impact of intensive farming on the progressive disappearance of wild salmon in the areas where they are present.

Damage to the brain

Norwegian doctors advise against eating farmed salmon for pregnant women because ofhigh content of toxins considered dangerous for him brain development of children. Dr Anne-Lise Bjorke allegedly put her career at serious risk for spreading this information. Claudette Bethune, toxicologist, would have been licensed by the Norwegian government for attempting to warn consumers of high levels of cadmium present in salmon.

add a comment of Salmon: 10 good reasons not to eat it