Running is good for the brain and repairs it 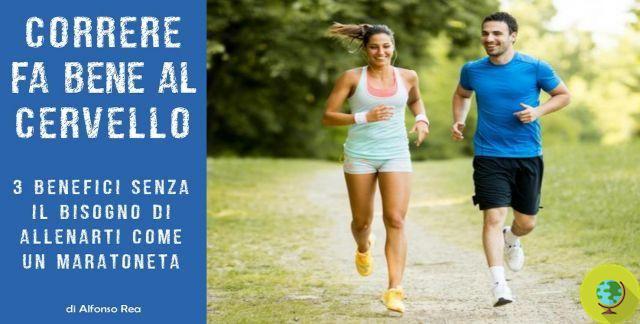 Running is good for the brain as it develops a substance that helps repair it and which may even help with multiple sclerosis in the future. This is the discovery of new scientific research conducted by the University of Ottawa and published in the Cell Reports journal.

Running is good for the brain as it develops a substance that helps to repair it and that could even help against multiple sclerosis in the future. This is the discovery of new scientific research conducted by the University of Ottawa and published in the Cell Reports journal.

It is not the first time that research has focused attention on beneficial effects of running not only at the cardiovascular level and for maintaining a healthy weight but also for the positive implications that this sport has on the brain. For example, we told you about the study by the CNR Institute of Cell Biology and Neurobiology which showed how running helps the birth of new neuronal stem cells or the one conducted by US researchers at the University of Kentucky who pointed out how running can contribute to formation of new brain cells and thus also counteract Alzheimer's disease.

Read also: RUNNING IS A TOUCH FOR BODY AND BRAIN. AND ALSO SLOWS DOWN THE ALZHEIMER

A new confirmation of the benefits of running on the brain comes this time from Canada and precisely from Ottawa where a research team has recently published the results obtained that would prove (for now only on an animal model) how running can be a useful means of repairing brain damage thanks to a substance known as nerve growth factor VGF.

In fact, the researchers noted how mice with brain development deficiency that normally have less life expectancy and psychomotor problems, when they run on a wheel, see their longevity improve in the long run, even reaching that of healthy animals and in some cases overcoming it. The team of experts realized that this benefit is due to the fact that running increases the growth factor VGF in their organism (only in the moment when you run) and this substance would be able to repair damage to the myelin sheath, which is the protective covering of nerve fibers.

Doctor David Picketts, researcher at the Ottawa Hospital and professor at the University of Ottawa stated that:

“VGF, nerve growth factor, is important for revive healing in damaged areas of the brain. The new research is particularly interesting because it helps explain the effect that physical exercise, such as running, can have on people with neurodegenerative diseases such as multiple sclerosis in which the myelin sheath is damaged. "

These results, all to be confirmed, pave the way for new studies to test the efficacy of VGF on neurodegenerative diseases just like the multiple sclerosis.