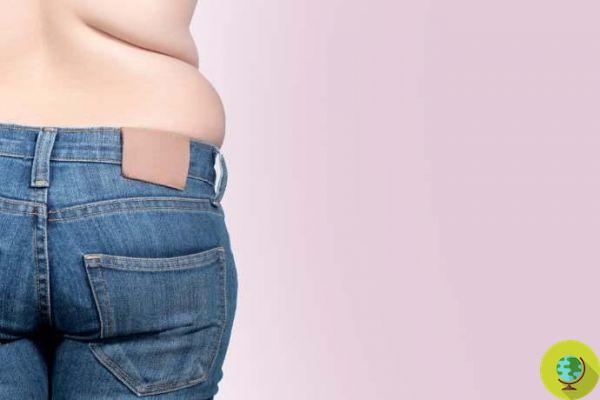 Genetic factors influence whether people store fat on their hips or other parts of the body. I study.

Needless to say, in fact, the influence of DNA on fat is greater in women


Round hips for her, bacon for him. If after the doors it seems that your body no longer responds to commands, you can do little. It's just the genes' fault. In fact, it is they who, in the true sense of the word, direct the fat deposits along the body.

This is confirmed by a research published in Nature Communications, conducted by the University of Uppsala on 360 thousand volunteers, according to which it is genetic factors that influence whether people store fat on their hips or in other parts of the body and that this effect is predominant in women and much lower in men.

"We know that women and men tend to store fat differently - women have the ability to store fat on their hips and legs more easily, while men tend to accumulate fat around the abdomen to a greater extent." lead author Mathias Rask-Andersen. This has been attributed to the effects of sex hormones such as estrogen, but the molecular mechanisms that control this phenomenon are quite unknown ”.

The researchers used data from the UK Biobank, a cohort study of half a million participants in the UK. Participants provided blood samples for genotyping, and fat tissue distribution was estimated using resistance measurements when feeding an electric current through the body. The study then tested millions of genetic variants across the genome for association with the distribution of fat in the arms, legs or trunk, identifying nearly a hundred genes that influence the distribution of adipose tissue in different areas of the body, with large differences between men and women.

“We were surprised by the stronger effect of genes in women. Many of these encode proteins that shape the extracellular matrix (that is, that part of tissue that functions as a support for cells), ”adds Asa Johansson, one of the researchers.

According to the study, the remodeling of the extracellular matrix is ​​one of the factors that decides the different distribution of fat in the body. There increased presence of adipose tissue in the abdomen has been linked to an increased risk of getting sick: Men, for example, have more abdominal fat than women, which may explain the prevalence of cardiovascular disease seen in males. Epidemiological studies have even shown that the ability to store fat around the hips and legs would offer women some protection against cardiovascular disease. The result of the current study may therefore lead to the development of new interventions to reduce the risk of cardiovascular disease.

"What we have discovered could be used - concludes Rask-Andersen - to develop new drugs capable of improving the distribution of fat and therefore reducing the risk of disease".

Genes or non-genes, in any case, let us remember that the presence of various fat and adiposity finds fertile ground in a sedentary lifestyle and poor diet. Let's never forget to pamper our body with regular physical activity and eating well!

Atrial fibrillation: symptoms, risks and how to intervene ❯

add a comment of Round hips or bacon? Where fat is concentrated is written in the DNA