Retire these breakfast cereals for mycotoxins

Mycotoxins in sticks with wheat bran. The Ministry of Health is launching a new alarm and recalling the product from supermarkets from the market Conad.


Another food alert after the glass in Coca Cola and cocoa cream. According to the safety notice of the Ministry of Health, the presence of deoxynivalenol (DON) above the limits set by the EC regulation 1881/2006 and SMI was found in the sticks with wheat bran of the Conad Piacersi brand. 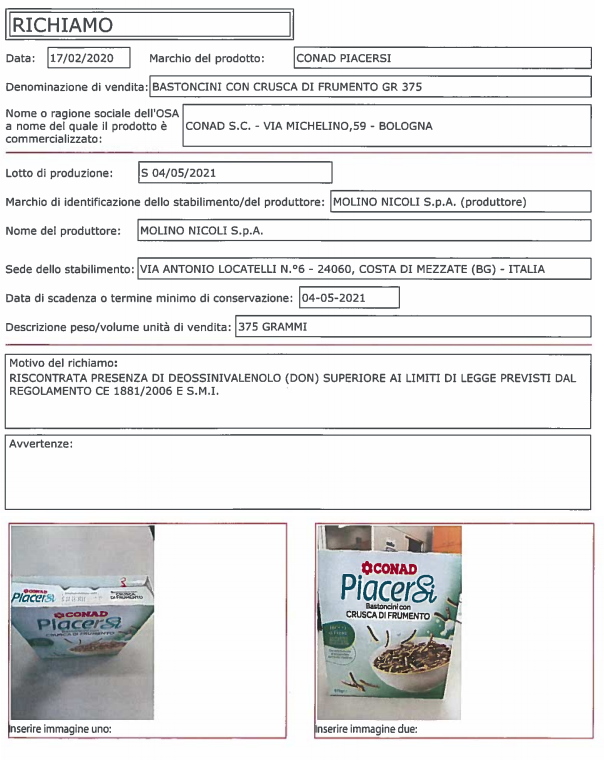 Also known as DON or vomitoxin, it is a mycotoxin that is part of the group of trichothecenes and is produced by some species of Fusarium, it is one of the most widespread mycotoxins in food and feed and in particular in cereals such as wheat, barley and corn.

It has toxic effects on humans and other mammals and can cause vomiting, diarrhea, malfunction of the hematopoietic system (anemia and leukopenia), lowering of the immune defenses. The tolerable daily dose (TDI) for humans of deoxynivalenol was set at 1 µg / kg:

Sources of reference: Ministry of Health

Ministry of Health recalls 8 batches of Coca Cola due to the presence of glass fragments in the bottles
Attention, withdrawn this cocoa cream: glass fragment found

Conad bran sticks withdrawn due to the presence of mycotoxins ❯

add a comment of Retire these breakfast cereals for mycotoxins