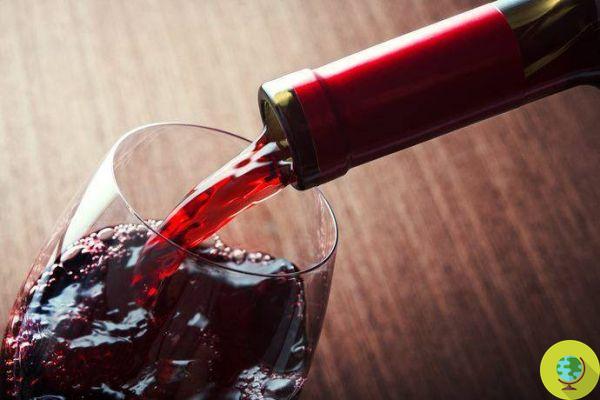 Red wine makes you lose weight and preserves muscle mass, all thanks to resveratrol, a phenol contained in red grapes.

That the Red wine it had several health benefits it was well known, but it actually did lose weight it is new, and certainly good news. This was demonstrated by research published by the University of Alberta, according to which resveratrol, phenol contained in red wine, can improve physical training, thereby helping to keep fit and lose weight.


And there's more: the same substance helps preserve muscle mass and this is great news not only for us but also for astronauts heading to Mars, more in need of protection than anyone else, as muscles and bones become weaker in zero gravity.

One proved it study conducted by Marie Mortreux for NASA, through laboratory simulations on rats given resveratrol, some exposed to Earth gravity, others to Martian gravity, for 14 days.

Some rats of the two groups were given phenol in water, the others only water. The result? Martian gravity greatly weakened the rats that did not take resveratrol but not those that drank it, all of which retained nearly identical muscle mass.

Proof that this substance could prevent the problem of weakening in the absence of training machinery. Although it is still necessary to understand if there are side effects and what are the doses of substance that can be administered to humans.

The other research cited, published in the Journal of Physiology and funded by the Canadian Institutes of Health Research, was instead conducted by Jason Dyck, researcher at Alberta Innovates - Health Solutions with numerous skills in various medical fields, and by his team who, through the laboratory experiments carried out have revealed the importance of resveratrol for physical performance, heart function and muscle strength, reaffirming its effectiveness from this point of view.

Of course, it is not that resveratrol is a substitute for physical activity but it can enhance its beneficial effects, as Jason Dick himself points out, and in the case of physically incapable people it can certainly be a help because it ensures similar benefits to the body. Benefits that can also benefit astronauts.

instead from a dietary point of view, resveratrol, considered an excellent anti-inflammatory and antioxidant, also useful for blood thinning, would have the ability to prevent fat cells from thickening, favoring its use by the body for energy. Not to mention that it would reduce the sense of hunger.

In addition to the study quoted, also another conducted by scientists from Washington State University, showed that resveratrol helps fight obesity. The study conducted on mice showed that those who were given a greater amount of this phenol burned excess fats more easily, turning them into good fats.

But there is bad news and it concerns the Red wine that yes, it contains resveratrol, but in a very minimal quantity and therefore not sufficient to make it effective as a remedy against obesity, although moderate use is still useful for enhancing physical exercise and improving shape.

But even better, according to the researchers, is to eat red grapes directly.

Red wine prevents the damage of smoking (but in moderation) ❯