Receipts are carcinogenic. Blame it on Bisphenol A 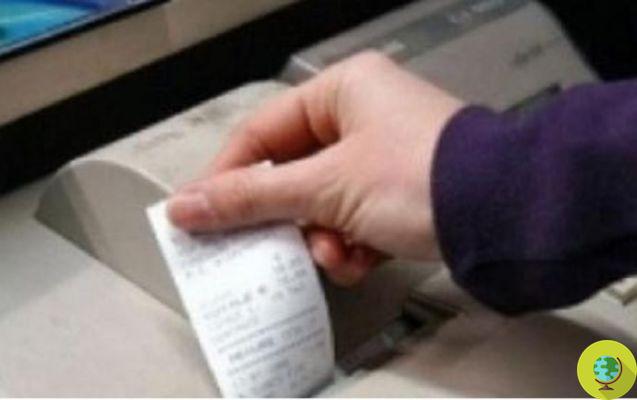 
Lo receipt is carcinogenic (but it must always be released!) and the fault lies with the Bisphenol A (Bpa). New American research confirms a other study from which it had already emerged that the receipts that we commonly handle are potentially harmful to human health because the thermal paper with which they are made contains its own Bpa, a component used mainly for the production of plastic materials for food packaging and containers and considered carcinogenic.

According to the new survey conducted at the University of Missouri-Columbia and posted on PlosOne, those who were exposed to high levels of Bpa through different types of receipts, had a increased absorption through the skin due to hand washing with disinfectants or soaps, which alter the degree of absorption of substances. Hand creams, sunscreens or touching greasy or greasy foods are also being blamed, movements that seem to favor a faster and greater absorption of Bisphenol.

WHAT IS BISPHENOL - Bisphenol A was indicated as "endocrine disruptor" (or endocrine disruptor), that is able to act by damaging the hormonal system. This substance, no longer used in the production of baby bottles, it is found above all in the glazing of cans, in some plastic bottles and on the surface of receipts or receipts from ATMs or other media that use the so-called thermal paper.

Read also: Plastic and food: how to recognize plastics that should never be used with food

"The first BPA was developed by a biochemist and tested as an artificial estrogen supplement - explains Frederick vom Saal, Professor of Biological Sciences at MU's College of Arts and Science - As a chemical endocrine disruptor, BPA has been shown to alter signaling mechanisms involving estrogen and other hormones. Retail and fast-food receipts, airline tickets, ATM receipts, and other thermal cards all use huge amounts of BPA on their surface to be printed. The problem is that we as consumers may have hand sanitizers, creams, soaps and sunscreens that dramatically alter the BPA absorption rate we find on these receipts. "

Essentially, skin absorption can greatly increase the absorption of bisphenol A in our body, more than "simple" ingestion. Solution? There will probably be new regulations for the United States and Europe, but something rightly makes us believe that it will be a long, long time to come. In the meantime, do not shy away from making a receipt and requesting it. This is not what makes the difference!

The receipts contain Bisphenol A: is there a danger to health?

Bisphenol S: is the Bisphenol A substitute equally harmful?

The forgetful do not exist. The brain is enough to train it! ❯

add a comment of Receipts are carcinogenic. Blame it on Bisphenol A