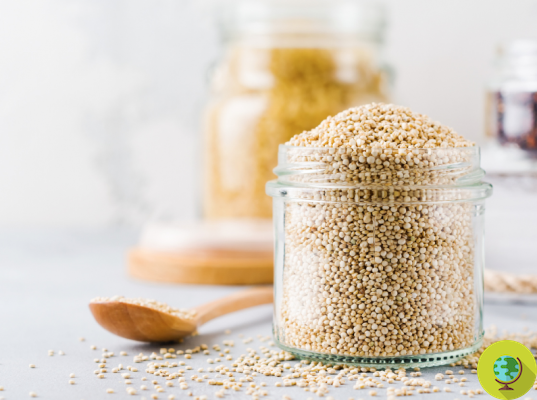 Is quinoa a superfood? Is its diffusion from South America to tables all over the world just a question of fashion? Fads pass, we know it well, but what remains are the nutritional properties and health benefits of quinoa. So let's try to understand why quinoa is considered a superfood, that is, a super nourishing food.

La Quinoa it's a superfoods? Is its diffusion from South America to tables all over the world just a question of fashion? Fashions pass, we know it well, but what remains are the nutritional properties and health benefits of Quinoa. So let's try to understand why it is considered a superfood, that is, a super nourishing food.

We can consider quinoa a true symbol of biodiversity in the territory of the Andes. Local populations have always chosen it as the basis of their diet. Together with amaranth, due to its richness in valuable nutrients, quinoa is considered one of the foods that could save the world from hunger.

Is quinoa a superfood?

In recent years, the science of it he investigated the nutritional properties and benefits for health. Some of the studies conducted so far on quinoa have shown that this food contains all essential amino acids that our body needs to obtain from food for the production of protein.

From the point of view of amino acids we summarize in a single food the nutritional characteristics present in cereals and legumes: cereals are lacking in some essential amino acids which are instead present in legumes, and vice versa.

The consumption of quinoa is suitable for everyone, even for those suffering from celiac disease, as it is gluten-free. Quinoa it is rich in antioxidants, it's a source of calcium, has excellent nutritional properties, is a food satiating and energetic, but at the same time light and very digestible.

Additionally quinoa has a index glicemico considered bass, equal to 53, and science is deepening its usefulness in the prevention and management of type 2 diabetes and to improve the metabolism of our body.

La FAO stated 2013 'International Year of Quinoa' because precisely this food can have an important role in the elimination of hunger, malnutrition and poverty. The important thing is that its cultivation continues to take place while respecting the environment, farmers and local populations. Quinoa was an important food source for pre-Columbian Andean civilizations, second only to potatoes. The diet of agricultural communities has always been based more on proteins of vegetable origin than on animal proteins and in this case quinoa has represented an indispensable food for the rural populations of the Andes.

Quinoa it is useful for preparing simple first courses - just rinse it and then cook it like pasta - but it's also perfect to add to soups and fillings. Furthermore, the Andean populations have always grinded the seeds for obtain a flour with which to prepare the bread.

In recent times on the web and on social networks there is a lot of discussion aboutenvironmental impact of quinoa. Is growing quinoa likely to become unsustainable? We had already dealt with this topic in 2013. We want to remember that any intensive cultivation with the use of herbicides and pesticides can cause damage to the environment and that in the world, intensive agriculture less respectful of ecosystems is linked to the large-scale production of legumes and cereals for the production of feed for farm animals.

READ also: QUINOA: HAS ITS SUCCESS MADE CULTIVATION UNSUSTAINABLE?

Legumes and cereals that could instead be used directly to feed populations in difficulty. As for the cultivation of quinoa we must remember that there is a virtuous circuit linked to fair trade for agricultural production that respects both the environment and local populations.

"The sale of quinoa through the channels of Fair Trade, it has allowed many peasant communities to emerge from isolation and misery in which they poured. It meant giving value to the millennial heritage of agricultural and cultural knowledge of the Andean territory and ensuring a fair income to invest in services for entire communities. Last but not least, it has allowed us to enrich our diet with an ingredient with a high nutritional value "- explains Altromercato.

So if we want to be sure that the quinoa we buy is sustainable, let's choose fair trade. To vary our diet it is not necessary to eat quinoa every day, just follow common sense: for example we can consume quinoa from time to time alternating with other seeds and cereals, such as millet, amaranth, rice, wheat, spelled, buckwheat and barley, to combine with vegetables and legumes in our dishes.

QUINOA: properties, USES AND WHERE TO FIND IT

Quinoa: properties, uses and where to find it ❯

add a comment of Quinoa: just fashion or real superfood?