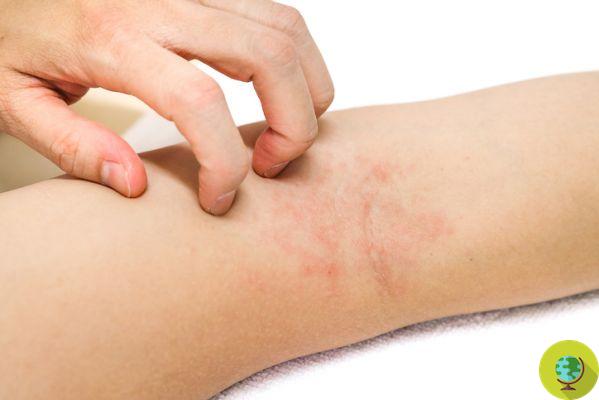 Psoriasis: the Mediterranean diet would also be a valid ally for those suffering from this annoying skin disease.

La Mediterranean diet it could help improve the Psoriasis and it would reduce the chances of developing more severe forms. Not only, therefore, an elixir of life, the Mediterranean style of food is also a valid ally for those suffering from this annoying skin disease.


This is confirmed by a study by the Hospital Mondor of Creteil, in France, and published by JAMA Dermatology, according to which a diet characterized by a high percentage of fruit, vegetables, cereals, fish, extra virgin olive oil, would be able to minimize chronic systemic inflammation thanks to the anti-inflammatory properties of these foods.

Psoriasis, as we know, is an annoying skin disorder that affects many people and can generate relationship problems, anxieties and sometimes even depression. Its relationship with food has never been fully clarified, although a correct diet free of alcohol and spirits and foods rich in arachidonic acid (a substance that has inflammatory power within our body) is generally recommended, among these: cured meats, red meat, butter, eggs, cream and other foods of animal origin. Even if they remove milk and dairy products, some people notice an improvement in their condition.

Celine Phan, who coordinated the research, and her colleagues carried out a large health study in France, collecting information on the eating habits of 158.361 volunteers for two years. The researchers sent all study participants a link to an online psoriasis questionnaire. Of the 35.735 who filled out the questionnaire, 3.557 reported having psoriasis, of which 878 were severe.

The eating habits of the volunteers who followed a Mediterranean diet, already known to be associated with a lower risk of chronic systemic inflammation and, after taking into account other lifestyle and health factors that may increase the risk of psoriasis, the researchers found that particular disease severity was less likely in people whose eating habits were more similar to the Mediterranean diet.

Household Cleaning: Chemical cleaners are as bad as 20 cigarettes a day ❯

add a comment of Psoriasis: The Mediterranean diet reduces inflammation. The new study