Psilocybin, confirmed the anti-depressant power of the active ingredient of magic mushrooms 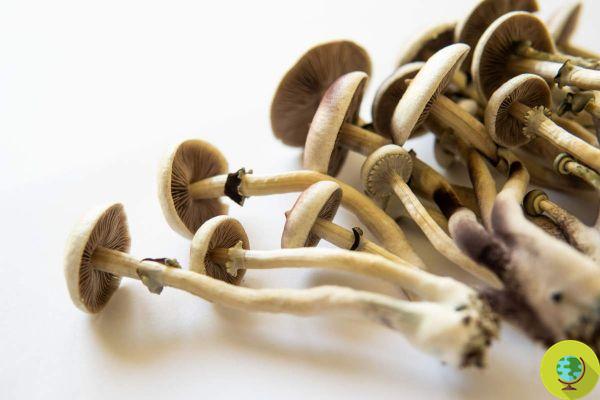 The active ingredient of "magic mushrooms", if with psychotherapy, can be of help against depression like antidepressant drugs.

Psilocybin, the active compound in hallucinogenic mushrooms, can be at least as effective as antidepressant drugs when combined with psychotherapy. This is what emerges from a study conducted by researchers from the Center for Psychedelic Research at Imperial College London.


On psilocybin, the same British scientists had a few years ago started studies aimed at treating a small group of patients suffering from depression with whom the more classic treatments had not worked. Now they arrive at a clearer result: the active ingredient contained in the "magic mushrooms" (psilocybin is a psychedelic alkaloid present in good concentrations in some kinds of mushrooms, such as Psilocybe and Panaeolus) has the same efficacy against depression as common antidepressant drugs .

But the main benefit is that side effects would be reduced to a minimum.

The researchers, led by Professor Robin Carhart-Harris, involved in a Phase 2 study - the results of which are in the New England Journal of Medicine - 59 patients with long-lasting (moderate to severe) major depressive disorder and then divided into two groups (one of 30 and one of 29 people): the first received two separate doses of 25 milligrams of psilocybin 3 weeks apart plus 6 weeks of daily placebo. The second group received two separate doses of 1 milligram of psilocybin 3 weeks apart plus 6 weeks of daily oral administration of escitalopram, the active ingredient of the main antidepressant drugs. The patients were not aware of what they were taking and all followed a course of psychotherapy at the same time.

Six weeks after the start of the trial, the participants did a "Quick Inventory of Depressive Symptomatology-Self-Report" questionnaire (QIDS-SR-16), to check their depressive state by means of a score and it was found that psilocybin had the same antidepressant effects of the drug, improving the mental health of patients. In reality, those who received psilocybin would have had a slightly greater improvement, but according to the researchers it was not statistically significant.

Indeed, the researchers specify that more targeted investigations will be needed to understand the real antidepressant efficacy of "hallucinogenic mushrooms" and that there should now be no race for an absolutely counterproductive "self-therapy". But one fact seems comforting: you know on the one hand antidepressants can have many negative reactions or even may not be effective, on the other hand in the case of psilocybin, the only side effect experienced was a passing headache.

add a comment of Psilocybin, confirmed the anti-depressant power of the active ingredient of magic mushrooms