Probiotic supplements can reduce the symptoms of intestinal inflammation in Parkinson's patients. I study

Probiotics could prove to be an additional therapy for people with Parkinson's disease, due to their effects on the gut

Probiotic supplements could prove to be an additional ancillary therapy for people with Parkinson's disease, its effects on the intestine (nausea, vomiting, constipation or diarrhea) can even precede the motor symptoms by years.


Changes in the gut microbial population can accompany symptoms such as diarrhea, vomiting, nausea or constipation, adversely affecting a person's overall health, but also the body's ability to absorb and metabolize medicines. In addition to this, such changes in the gut associated with Parkinson's disease can reflect processes that worsen other symptoms of the disorder: studies have suggested that inflammation in the gut can cause a lack of assimilation and a consequent agglomeration of the disease. alpha-synuclein protein in the colon walls and in the cells of the local immune system.

Aggregation of this protein also causes the loss of brain cells that produce dopamine - the main symptom of Parkinson's. Deposits of this protein can travel from the intestine to the brain through the so-called vagus nerve (one of the longest nerves in our body and part of the enteric nervous system, which governs the functionality of the intestinal tract).

(Read also: Probiotics: the unexpected beneficial effect for the lungs discovered by a new study)

An international team of scientists from Belgium and the UK conducted a preclinical study to determine whether a certain type of probiotic supplement can alter the gut microbiome in Parkinson's patients, and whether probiotics can improve other gut health indicators among these patients. Because of the complications of conducting experiments directly in people's gut, the researchers created models of gut microbiomes from stool samples from both Parkinson's and healthy people. Each sample was then divided into two parts: the first part was fermented with probiotics for 48h, the second did not undergo the fermentation process.

After the incubation period, the researchers compared changes in bacterial composition and metabolic activity, in the production of inflammatory molecules, in how cells responded to a simulated injury, and the robustness of the cellular junctions that connect the cells. proteins that preserve the integrity of the intestinal barrier. Overall, it was found that the presence of probiotics significantly altered the bacterial composition of stool, with important improvements in gut health indicators. 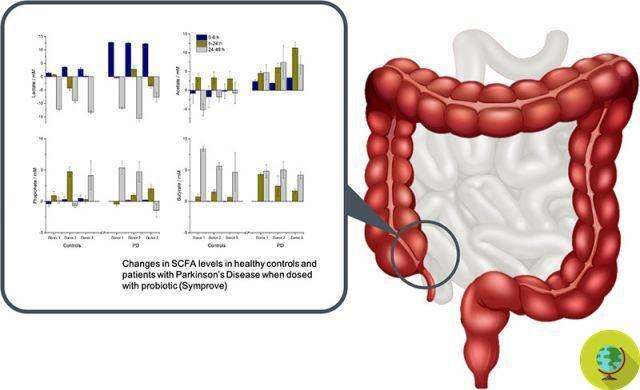 According to what emerged from this study, probiotics have been shown to be an excellent ancillary therapy (in addition to the standard one) in the treatment of patients with Parkinson's disease - even if the limited study sample requires a cautious interpretation of the results, as well as the need for further research in this regard.

READ ALL OUR ARTICLES ON SUPPLEMENTS

add a comment of Probiotic supplements can reduce the symptoms of intestinal inflammation in Parkinson's patients. I study