When you are anemic the doctor suggests you take "iron", some vegetables such as spinach contain more of it than other species. On the other hand, mercury accumulates in fish meat and in high concentrations is a danger to human health. But the titanium dioxide element that I found transcribed in the list of ingredients of a licorice candy, does not seem to me to be in the list of components necessary for the health of the organism or in those dangers to health.

When you are anemic the doctor suggests you take "iron", some vegetables such as spinach contain more of it than other species. Instead the mercury it accumulates in fish meat and in high concentrations is a danger to human health. But the titanium dioxide element that I found transcribed in the list of ingredients of a licorice candy, it does not seem to me that it is in the list of components necessary for the health of the organism or in those dangers to health.

I refer to wikipedia to know what titanium dioxide is and it is not a good read. However, I know that cases in which the ingredients list of hygienic, cosmetic, food products, chemical compounds that recall metals are indicated (just think of the baby cream atzinc oxide) that we know or think we know harmless, while, if seen instead with the eye of science, they immediately make us anxious (but fortunately at the Ministry of Health they are not anxiety-inducing).

So I knew the titanium dioxide is the "white" of paints and diaphanous synthetic fibers; for the same reason it is also used in cosmetics. It evidently has physical properties that enhance its wide industrial use (including the quality / price ratio). Then I found out about the online dictionary which is a must of industrial food (i.e. where the white must be whiter) and which in most cases is hidden under the anonymous code of E171.

Given the premises, the TiO2 cannot but be in the pure white of licorice sugared almonds or mint or in any case where the white of the sugar dragee must always be the same, packet after packet, year after year. But if a perfect copy does not exist in nature because they are all original (except for the cloned product which is not very "natural" in the humanistic sense of the term), then because we, who are part of Nature, need to products that are always the same as themselves, to convince us of the goodness of purchasing a "packaged" product, whether it be candy or cream?

Doing a bit of an examination of conscience: would we always buy the candy with a licorice heart if a certain difference in tone was noticed between the candy and the candy in the box? Perhaps we will think that something like this happened: "it has certainly expired "; or:" they changed the composition“, And the conditioning would be strong enough to make us feel a different flavor too - despite the fact that even the aroma is artificially added to make the sugared almond always the same.

But if for build loyalty to the industrial product we know we have need for repetitiveness of shape, color and flavor "Built at a table" (from other human beings), then why are we surprised, we are indignant, we write destructive comments on social media, if once finally a company in all honesty writes that its confetti contain what others simply are silent and that in this case wikipedia describes in the its scientific crudeness as a "colorless crystalline powder… with a high refractive index of light”(Editor's note: that's why the snow - white - dazzles). Since this is the human reaction, once again the industry (always made by other human beings like yours), satisfies you: the sugared almond is perfectly white - because you know that white is the candid color of sugar (refined and therefore chemically treated), of bleached cotton (with bleach) and of zinc and… titanium cream. 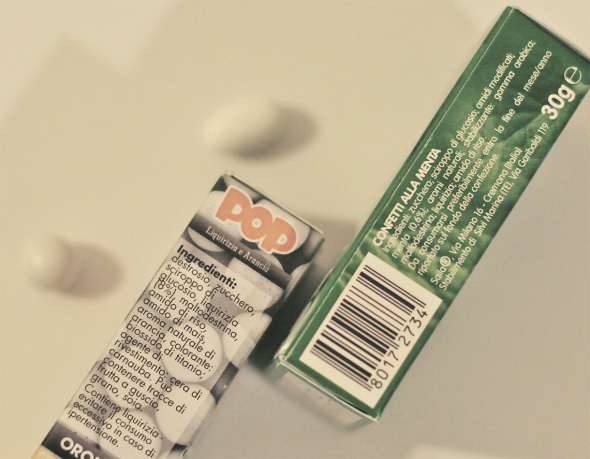 Let's look at the first photograph: two anonymous sugared almonds are compared, both white, of which only one produced by a well-known brand, but they both look equally appetizing. In the second photo, on the other hand, you can also see the package and read the composition of the ingredients. In the less well-known one - on the left - you can read the word horribilis and in the other, nothing; would it therefore follow that one is a synthetic white sugared almond and the other natural white? To me - consumer - I am not offered the tool to understand it. But I doubt that the left-wing package company is so self-defeating or ignorant as to write what it knows it could. stand out negatively in the consumer's eye without there being a legal obligation. So is there a law that obliges / does not oblige us to clearly transcribe what we put in our mouths to freshen the breath and - worse - let our children suck? L'evidence is NO, there is not. Or it is a law with an “optional” application.

The problem therefore is not only whether or not there is titanium dioxide, whether it hurts or does not hurt - assuming that there is at least sufficient consciousness in those humans who are predisposed to health control and vigilance. common - but the problem is: if keeping silent by law is better than telling without legal protection. The answer is obvious, the citizen still lowers his head in yet another frustration: being silent is better. This is how the typical buyer of the large distribution chains of the last 50 years - I can only tell about my time - was educated by the state with the consequence that it more easily rewards those who hide, those who distract with tricks while guillotine instead mercilessly. 'honest and the revolutionary who speaks and writes the truth because he is out of the box; because he wrote what others are not obliged to do or rather have not dared to do - ed: out of cowardice towards their own species more than for money!

Out of political empathy and controversy, my solidarity goes to the left-hand package, but my stomach betrays me and my brain falters because the licorice sugared almonds with orange flavor (that is, without even rubbing the orange by mistake) they just do not invite me to the gesture: disconsolately they will remain to mold in the package (which, however, I am not sure because sugar is "hydrophilic" that is, it captures humidity and these sugared almonds stay firm for years - mah!). Unfortunately I ate the other as perhaps a bit 'all of us. I am not dead and I will not die for it even if I still don't understand what it is "Stabilizer" mentioned in the ingredient list of the noblest green package in the photo. What will there be to "stabilize" in this candy that the other must not do; once again it is not known and perhaps once again this is another story.

- 7 food additives and substances to avoid

First courses with zucchini: the 10 best recipes (plus one) ❯