Potato milk, the new trendy vegetable drink: but is it really nutritious and sustainable? 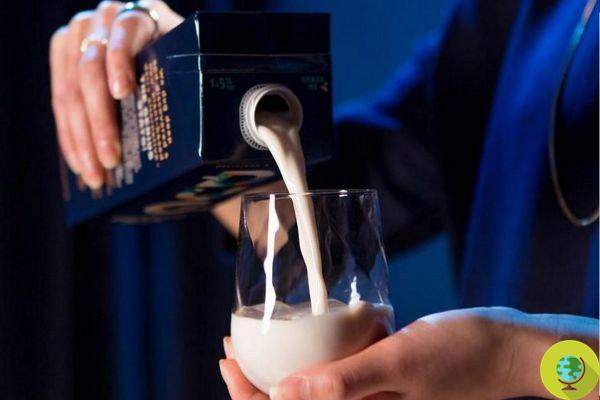 The novelty of potato milk has arrived on the British and Swedish market: what does it taste like? Can it be considered a healthy and sustainable alternative to cow's milk?

Potato milk has recently made its debut in the diverse world of vegetable drinks. Some might turn up their noses, but this veg alternative is already trending in some countries, including Sweden and the UK. The Swedish start-up Veg of Lund, which collaborates with the University of Lund to give life to its innovative food products, is launching it on the market. But is potato milk really nutritious and above all sustainable? Let's be clear.

What is potato milk, how is it made and what does it taste like

“DUG drinks are not obtained simply by squeezing potatoes. - explains the start-up - There is much more. The secret method of making DUG drinks is a patented emulsion of potatoes and rapeseed oil developed by Professor Eva Tornberg of the University of Lund in Sweden ”.

There are three variants of potato milk: the Original, the Barista (creamier, to use for example in coffee) and the Unsweetened (free of added sugars): The whole range is lactose, soy or gluten free, so it is suitable to allergy sufferers. Potato milk can be enjoyed on its own, in coffee or with breakfast cereals. Also, you can use it for various recipes such as baked desserts. The cost is quite affordable: around 8 euros for 3 (mixed) one-liter packs.

But what does this drink taste like? According to the manufacturer's reports, this "milk" has a slightly salty taste reminiscent of raw potatoes. However, it is rather neutral. This is why it is very versatile in the kitchen.

The Veg of Land brand stands out for its commitment to sustainability. “Potatoes don't need much to grow, which makes them a super sustainable crop compared to others like soy, almonds or oats,” explains the company. To give an example in terms of land use, the cultivation of potatoes is much more efficient than that of oats.

Finally, they don't need too much water to grow: about 56 times less than almonds, which make almond milk. Overall, therefore, potato milk appears to be a rather sustainable alternative to cow's milk and other plant-based drinks. The only sore point is that of the use of rapeseed oil to produce the drink, behind the production of which there is often exploitation and deforestation.

Organic hemp milk: how to prepare it at home ❯

add a comment of Potato milk, the new trendy vegetable drink: but is it really nutritious and sustainable?