Polycystic ovary syndrome, what are the symptoms? What are the causes that trigger it? How to diagnose it and what consequences, especially if you are planning a pregnancy?

Syndrome ofpolycystic ovary, what are the symptoms? Which ones causes that trigger it? How to diagnose it and what consequences, especially if you are planning a pregnancy?


With polycystic ovary syndrome, also known as ovarian polycystosis (PCO) or Stein-Leventhal syndrome, it indicates a series of symptoms resulting from a real hormonal imbalance in women of childbearing age. It is characterized by the presence of enlarged ovaries filled with cysts of various sizes. But how a polycystic ovary is formed? Can we live with it? What are the advice to follow?

About 5/10% of women in the age group between 18 and 44 in the world suffer from polycystic ovary, which, often, can also go unnoticed, so much so that many realize they have a polycystic ovary only when they start looking for a pregnancy.

READ also: BROWN LEAKS (SPOTTING): WHAT ARE THEY, CAUSES AND WHEN TO WORRY

What is Polycystic Ovary Syndrome

It is a endocrine disorder affecting women of reproductive age and causing a hormonal disorder such as to have them irregular menstruation, a feeling of bloating, hirsutism, but also high blood pressure, diabetes and a tendency to be overweight.

In the presence of this syndrome, the ovaries are larger than average and have numerous cysts inside them.

For PCO to be diagnosed, they must be found at least two of the following three conditionsi:

Women who suffer from polycystic ovary then have the increased risk of developing insulin resistance, which in turn can be linked to problems with obesity, type 2 diabetes mellitus, cardiovascular disease and high cholesterol. 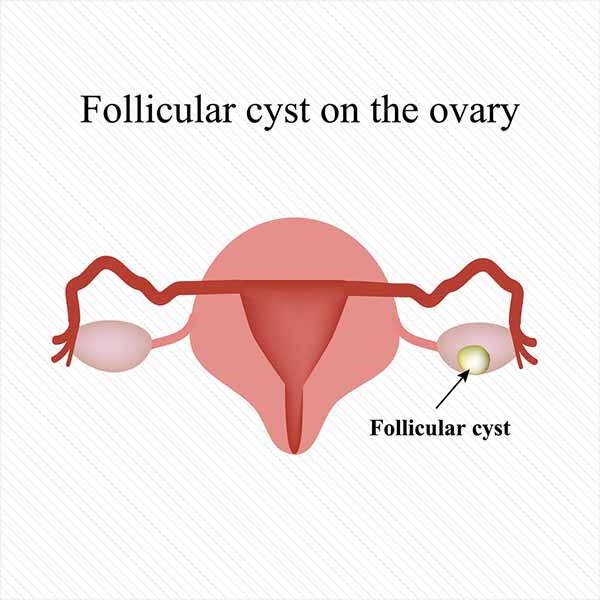 If the task of the ovaries is to "Release" each month the mature oocyte ready to be fertilized, in the presence of polycystic ovary syndrome this does not happen as it should: the follicles that contain the oocytes almost never reach complete maturation and therefore ovulation does not occur. In this way the follicles and oocytes remain "forced" in that area, thus facilitating the creation of many small cysts and the increase in size of the ovaries.

I symptoms of polycystic ovary syndrome are due to "chronic anovulation", that is toconstant absence of ovulation, associated with an increase in the production and secretion of androgens, the so-called "hyperandrogenism".

In general, there are three symptoms almost always present in the case of polycystic ovary:

Ovarian polycystosis may also occasionally be associated with some hormonal changes causing hyperandrogenism, as:

In summary, the most common symptoms of polycystic ovary syndrome are:

On causes of a polycystic ovary the scientific debate is still open. Precise origins, in fact, are not yet known. Some studies have documented a hypothesis of hereditary transmission (women whose mothers or sisters suffer from it would be more at risk), just as it would be likely that the syndrome occurs in patients with a positive family history of type II diabetes, non-insulin dependent, and premature baldness in male relatives.

The risk of contracting a polycystic ovary also appears higher if the patient is overweight.

Other research links the onset of the syndrome to certain situations such as poor reaction of white blood cells in front of infections: in these cases the polycystic ovaries would be stimulated. Still others associate the most important cause of polycystic ovary withhyperandrogenism, responsible for hirsutism and, indirectly, for anovulation and cycle disorders.

Hyperandrogenism is one disproportionate production of androgen hormones in women. This excess of androgens is due to a series of hormonal alterations that characterize ovarian polycystosis: in fact, we are talking about an increase in LH levels and excessive production of estrogen and androgen hormones on the part of the ovary. In particular, it is precisely the irregular secretion of LH that stimulates the ovary too much to produce this type of hormones in abundance.

In polycystic ovary syndrome the concentration of FSH, also produced by the pituitary, is instead reduced. Furthermore, the secretory variations of LH and FSH linked to an ovulatory menstrual cycle are abolished.

LH and FSH are respectively luteinizing hormone and follicle stimulating hormone and are the so-called "gonadotropins", hormones that regulate the activity of the gonads, that is the functions of the male and female reproductive organs.

In summary, the consequences for PCO sufferers they can be:

As we have seen, polycystic ovary syndrome includes a variety of symptoms, so much so that doctors can also administer different types of drugs. It is obvious that it is evaluated on a case-by-case basis and it is it is always advisable to refer to your doctor.

The first tip any expert will give you, however, will in any case be about your lifestyle. Most of the time, in fact, it is recommended to:

A series of therapies will then follow which may include the use of:

READ also: HYPOCALORIC DIET: HOW AND WHICH TO CHOOSE, SCHEMES AND ADVICE OF NUTRITIONISTS

Can i get pregnant if i have polycystic ovary?

Yes and it is proven: PCO is one of the main causes of female infertility, but people with polycystic ovary can become pregnant. However, always follow the instructions of your doctor.

For many women with PCO who want to get pregnant, the gynecologist will first recommend lose weight and lifestyle change before taking any medications, to see if ovulation naturally restores and improves the chance of pregnancy.

Then there are one series of medicines which can be administered from time to time:

READ also: FERTILE DAYS: ALL THE WAYS TO CALCULATE THEM

In any case, please refer to the evaluation of your gynecologist.

About women and pregnancy you may also be interested in:

As we said, among the first things your doctor can recommend is one low-calorie diet. It is generally recommended to reduce sugars and complex carbohydrates, to hire many fibers and cut down on saturated fat, eat lots of fruits and vegetables, and avoid carbohydrate-only meals.

The foods to avoid are:

Kinder eggs, how many children have been contaminated with salmonella? Official updated data ❯