Pollens, never as high as in this season. A nightmare for allergy sufferers, at the time of the coronavirus 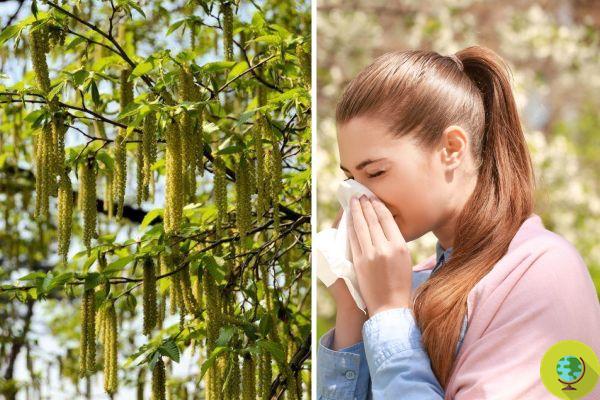 Pollen boom. The peak of birch and hornbeam, reached in April, was even six times higher than the average of the last 30 years

It's a nightmare spring for those allergic to pollen. The latest bulletin provided by the Edmund Mach Foundation and APSS Pollini revealed that pollen levels of hornbeam e birch have been "skyrocketing": the peak, reached in April, in fact was even sand times higher than the average of the last 30 years.


Rhinitis, watery eyes and sneezing. Those who are allergic at this time have gone through and are going through one of the worst times of the year and 2020 has also proved to be a particularly difficult year for those suffering from hornbeam and birch pollen, present in exceptionally high concentrations.

The aerobiological monitoring conducted by the Edmund Mach Foundation made it possible to discover that the pollen of these two tree plants, particularly allergenic, reached a peak six times higher than the average of the last thirty years, the second in intensity after that which occurred in 2012 for the birch and in 2018 for the hornbeam.

"Now the concentrations of hornbeam and birch pollen are decreasing - explains Elena Gottardini of the FEM Aerobiological Monitoring Center in San Michele -, but they are still high and above the average".

Pollini 6 May highlights the sharp decline in birch and hornbeam, now close to the end of this ...

Posted by Fondazione Edmund Mach on Wednesday, May 6, 2020

People who suffer from allergies to these pollens know this well. The APSS reported that there have been many phone calls and requests for information from allergic patients, worried by the presence of particularly strong and persistent symptoms, much more intense than in previous years: among these nasal obstruction, conjunctivitis, cough and asthma .

“The conditions that have determined the current state of the parks and green areas in the city do not help, wherever the grass is tall and the ruderal, parietaria, lancuiuola species have been able to colonize large portions of our streets. The sharp rise in temperature and persistent drought could shorten the flowering period ”, explains the University of Tor Vergata.

Allergies in the time of the coronavirus

The ailments in fact coincided with the peak of the Covid 19 emergency and many feared that it could be coronavirus, but the absence of fever and the response to drug therapy made it possible to differentiate the two pathologies.

What awaits us? As explained by the Aerobiological Monitoring Center of the EMF, the long flowering period of the parietaria has now begun, which will reach its peak in the summer and will continue to release pollen into the atmosphere until autumn.

As Antonella Cristofori of the Edmund Mach Foundation explained,

“Grass pollen persist in high concentrations but are decreasing. Pollen from urticaceae, including the parietariae, are in average concentrations and are gradually increasing ".

If you are allergic to pollen, check this map - even in summer they are lurking

add a comment of Pollens, never as high as in this season. A nightmare for allergy sufferers, at the time of the coronavirus