"Poisoned" peppers and chillies: you can find traces of up to 115 pesticides 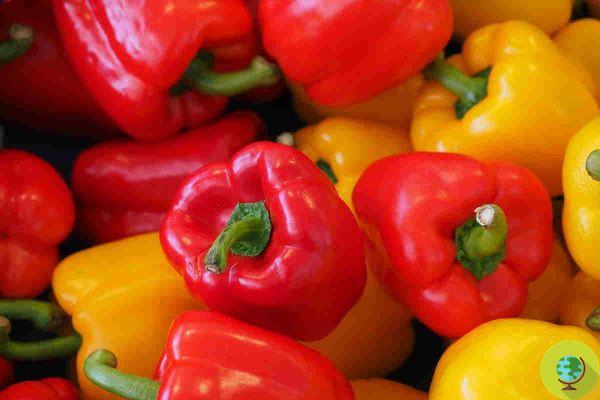 Peppers and chillies also found a place in the annual "dirty dozen" list for the first time.

As every year comes the "Dirty Dozen", the "dirty dozen" of vegetables and fruit with the highest levels of chemicals. From the (inevitable) strawberries to apples, passing through nectarines and spinach, this year not only cabbages have been joined by turnip greens, but they first found a place on the infamous list too pepperoni e chili Peppers.


According to the new EWG report, nearly 70% of non-organic products sold in the United States contain pesticide residues, and more than 90% of strawberry, apple and green leaf samples tested positive for residues of two or more pesticides.

It is the 17th consecutive year that theEnvironmental working group analyzes about 50 different types of fruit and vegetables to assess the presence of potentially dangerous pesticides which then end up on our tables.

What we did not expect is that even the gluttonous peppers and chillies were particularly "poisoned".

From the “Dirty dozen”, in fact, in which peppers and chillies are in tenth place, it is clear that yes, pesticides do not spare even these delights.

Peppers and chillies, tested for the first time since 2012 and 2011 respectively, are also included on this year's list at number 10. The USDA, the United States Department of Agriculture, found 115 pesticides on peppers. By far the worst of all foods tested.

Peppers and chillies respectively contain worrying levels of acephalous e chlorpyrifos - organophosphate insecticides that can damage children's developing brains and are banned from use on some crops in the United States and from all uses in the EU. In 2017, the EPA, under the Trump administration, rejected a proposed ban on chlorpyrifos, allowing it to remain on the market and later in food.

The solution, buy organic or start growing on your own. Here you will find 10 vegetables to grow in the garden of our balcony!

add a comment of "Poisoned" peppers and chillies: you can find traces of up to 115 pesticides