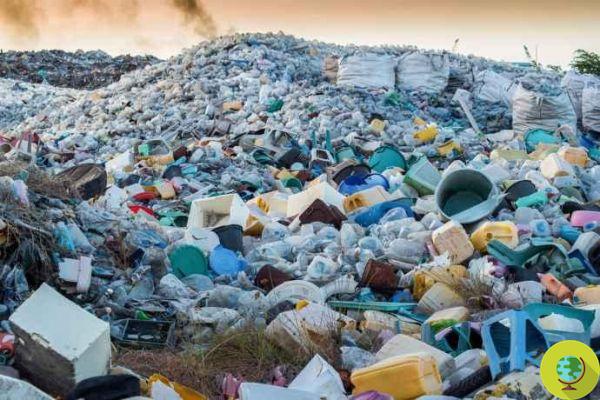 Oil was and oil (or almost) is back: plastic can become fuel for cars. A research group from the University of Swansea (UK) has developed a technique to transform it into hydrogen, a potential fuel for cars

Oil was and oil (or almost) is back: plastic can become fuel for cars. A research group from the University of Swansea (UK) has developed a technique to transform it into hydrogen, a potential fuel for cars.


According to what the researchers described, plastic is dissolved in a suitable solution in the presence of a compound capable of absorbing light, then exposed to the sun or a sunlight simulator.

More in detail, it is necessary to "rub" the plastic cut into small pieces to make it rough, prepare a solution with a high pH, ​​add a photocatalyst, that is a molecule that absorbs sunlight and then transforms it into chemical energy, speeding up some reactions. This process, in particular, would convert the hydrogen plastic, a possible fuel for cars.

The problem of plastic disposal has now reached global levels of unsustainability: plastic is everywhere, dispersed on our streets, on beaches and even in the Mariana Trench and in other ocean depths, and it takes hundreds of years to degrade, constituting a huge environmental problem.

Several solutions have been hypothesized, first of all methods for cleaning the oceans such as Boyan Slat's giant pac-man, officially the first automated system for the collection of plastic in the oceans.

But even if we succeeded in collecting all the dispersed plastic, the problem of disposal would remain (and remains). Therefore it is also necessary to develop recycling / reuse technologies. And this is the direction taken by the University of Swansea.

Of course, even if the mechanism led to fuel for cars, it would still be a polluting method of producing energy, because, as the researchers themselves admit, the conversion process also produces carbon dioxide, a well-known greenhouse gas and co-responsible for human-induced climate change. However, at least, we would recycle plastic now destined to end up, often, in the stomach of the fish.

Another advantage of the Swansea mechanism is its own adaptability. Many of the plastic recycling technologies work only (or almost) with pure materials, as in the case of PET, which very often is not recycled because the need to purify it makes it uneconomical.

"The beauty of this process is that it is not very" picky "and can degrade any type of waste - Moritz Kuehnel, co-author of the paper, told the BBC in this regard - Even if there is some food or some fat. margarine, the reaction does not stop, on the contrary, it becomes better ”.

However, only half of the input material becomes hydrogen. However, the authors explain, the rest can be used to make new plastic because the reaction produces hydrogen and a precursor to new material.

The work, which still takes a few years to test on an industrial scale, was funded by the Engineering and Physical Sciences Research Council and an Australian oil company.

On the problem of plastics read also:

Swifts travel very fast! With these tricks they manage to travel more than 830 km per day ❯