Plastic even in kitchen salt: the new disturbing study 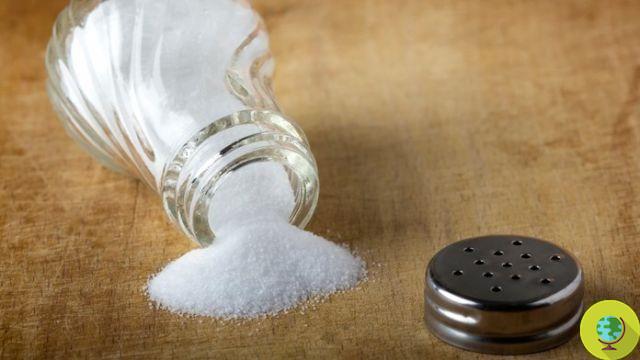 In the salt we commonly consume there are traces of plastic. Nobody is saved, from the United States to China, via Europe. That we live on a planet now invaded by plastic is nothing new, but now this pollutant material risks ending up (certainly it already does), on our plates every day.

In the salt we commonly consume there are traces of plastic. Nobody is saved, from the United States to China, via Europe. That we live on a planet now invaded by plastic is nothing new, but now this polluting material risks ending up (it certainly already does), on our plates every day.

A new research published in preview by Guardian showed that small particles were found in sea salt used in various countries, the United Kingdom, France, Spain, China and the United States.

And now it is also the turn of salt

Researchers believe that most of the contamination you derive from microplastics deriving from disposable items such as water bottles abandoned in the sea. According to the United Nations, up to 12,7 million tons of plastic ends up in oceans around the world every year.

"Not only are plastics pervasive in our society in terms of everyday use, but they are pervasive in the environment as well," he said. Sherri Mason, a professor at the State University of New York at Fredonia, who conducted the latest research on the presence of plastic in salt. Plastics are "ubiquitous, in the air, in the water, in the seafood we eat, in the beer we drink, in the salt we use, plastic is everywhereMason maintains.

Working with researchers from the University of Minnesota to examine microplastics in salt, beer and drinking water, the research looked at 12 different types of salt (including 10 sea salts) purchased from U.S. grocery stores around the world. .

The results are worrying: consuming 2,3 grams of salt per day could ingest up to 660 plastic particles per year. However, considering that even more is consumed in some countries than the recommended dose, this figure soars.

The impact of plastic ingestion on health is unknown. Scientists have been wondering for some time but with difficulty given that they cannot find a control group of humans who have never been exposed.

"Everyone is exposed at some point at any time, from gestation to death", they wrote in 2013, researchers from the Johns Hopkins Bloomberg School of Public Health and Arizona State University. "Detectable levels of bisphenol A have been found in the urine of 95% of the adult population of the United States."

Another study, conducted in Malaysia, had come to the same conclusion, finding that out of 17 brands of sea salt sold in 8 different countries, only one was plastic-free. The rest of the samples had a total of 72 particles of which 1 in 10 contained microplastics.

A scenario that is not very reassuring given the daily use of salt. One more reason to reduce the quantities at the table.

Platano: 10 recipes to enjoy it at its best ❯

add a comment of Plastic even in kitchen salt: the new disturbing study