Plastic and food: how to recognize plastics that should never be used with food

Knowing that every day we are exposed to an unimaginable number of synthetic chemicals and therefore with unnatural and controversial effects on our organism, the question arises: why expose ourselves to these objects too? and do you still know the plastics you use in contact with your food?

Raise your hand if you don't use i tupperware for food… Don't cheat! Some of us are also adept at bendo&Co. so you can't really lie ... but those of us who know the "recycling code number"Of our containers or bento?

What each of us can discover simply by looking under the offending container is a number corresponding to the plastic material of which it is made, if you read a 3 or a 7 it means that container was made with respectivelyPVC (polyvinyl chloride) a type of plastic with toxic effects on the organism because you contain HA (according to numerous studies it causes, if exposed to long term, decrease in weight and bone mass, liver damage and damage to the reproductive system, cancer and it's just not toxic though used in contact with food but it is also during its production cycle and its disposal) substance that more easily accumulates through fats such as in the packaging of meat covered with plastic film containing DEHA, and n ° 7 instead means a series of different plastics including the polycarbonate which contains bisphenol A usually abbreviated to BPA also defined in the scientific field as an endocrine destroyer, is a fundamental building block in the synthesis of plastics and plastic additives and its derivatives have been on the market for more than 50 years.

"The potential vast human exposure, the interaction with estrogen receptors and the possible release into food by containers, for example, in polycarbonate or on the presence of BPA in dental sealants have motivated the attention towards BPA by the scientific community and agencies responsible for risk assessment. In 2006, the European Food Safety Authority (EFSA) evaluated BPA specifically for its use in materials in contact with food, concluding that "experimental studies show clear evidence of endocrine effects and allow for the definition of a maximum tolerable daily dose (TDI ) of 0,05 mg / kg bw "; ... "on the other hand, the assessment of possible human exposure through food contact materials excludes a significant risk of exceeding the TDI." in the meantime, however… “… New scientific evidence increases concern about the effects of the controversial bisphenol A (BPA): recent studies have found new, unexpected sources of exposure. Two recent studies show that BPA has good skin absorption (1) and that people who handle heat-sensitive paper receipts daily have higher than average levels of BPA in their urine (2). Furthermore, the results obtained from a study on a large cohort (about 1500 participants) indicate that the half-life of BPA could be longer than expected, probably due to continuous and repeated exposures through different sources, food and otherwise, as well as to a certain persistence in body tissues (3). "

"As outlined in the recent EFSA's opinion (7) there are significant areas of uncertainty regarding the effects of BPA, especially for those relevant to pre- and postnatal development such as programming of the brain (8-9), of the tissues of the reproductive system ( 10) and immune functions. "

What is also known is that in pregnant or breastfeeding women, BPA passes through the bloodstream and reaches the baby, and there are several studies showing that concern about its use is legitimate. Canada has banned all BPA-containing plastics since 2008. In Europe for the moment only i bottle.

Knowing that every day we are exposed to an unimaginable number of synthetic chemicals and therefore with unnatural and controversial effects on our organism, the question arises: why expose ourselves to these objects too? it's still "do you know the plastics you use in contact with your food? "

7 = all other plastics including polycarbonate and epoxy resins

the plastics suitable for food preservation are the number 1,2,4 and 5. 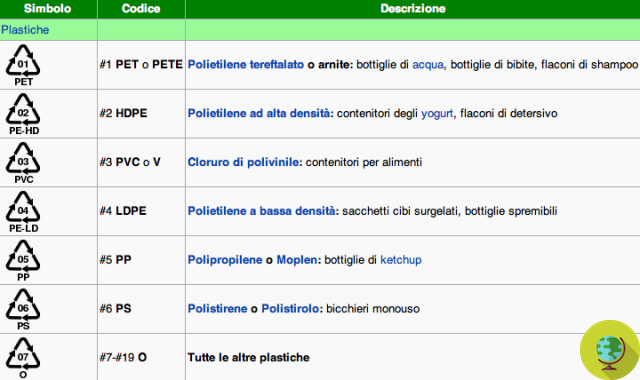 What to do after you have checked all your plastics that we use and that we have at home?

First discard older, worn out containers, scratched or showing halos of color type on white or transparent containers yellowed or colored perhaps by sauces or other, then before putting the food wait until it is cold, To avoid cooking in plastic (this is valid for those who cook with microwaves) because even if it is suitable it does not mean that it is 100% safe but it does mean that it does not deform or that it does not melt with the microwave cooking process.

When preparing sandwiches or sandwiches do not use plastic bags either transparent film to keep them, prefer napkins folded in a paper bag of bread or even self-made in cotton like those of when you went to elementary school!

In general however the advice is never forget that plastic is not biodegradable and that if you have to choose between food containers it is always better to prefer stainless steel, glass, pyrex, terracotta, ceramic or fabric and paper!

“The idea of ​​completely eliminating BPA exposure is, at the moment, chimerical; regulatory authorities are taking measures to protect the groups most vulnerable to exposure: for example, in 2011 the European Union will ban the production first (March) and then sale (June) of polycarbonate baby bottles containing BPA (15 ). In the meantime we can, at least, try to reduce exposure to BPA by following simple steps, such as:

-Do not use polycarbonate food containers in the microwave. Polycarbonate is strong and durable, but with wear from time and high temperatures it may release BPA.

-Reduce the use of canned foods, especially for hot or liquid foods. Instead, opt for glass, porcelain or stainless steel containers without internal plastic linings.

-If you live in a non-EU country, choose BPA-free bottles.

-When using a plastic water bottle, do not re-use multiple times.

-Adopt careful oral hygiene in order to reduce the need for dental treatment.

-Wear gloves if you handle a lot of thermal paper receipts. "

Pizzoccheri: the original recipe from Valtellina and 10 variations ❯

add a comment of Plastic and food: how to recognize plastics that should never be used with food