Pesticides in fruit and vegetables cut sperm in half: the Harvard shock study 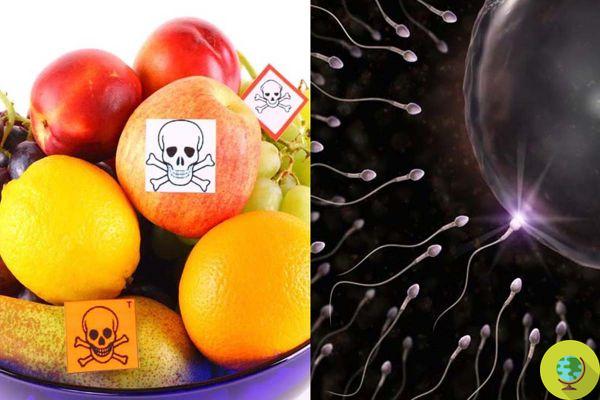 Pesticides in food, enemies of male fertility. A new study by scientists at Harvard University has found that consuming fruits and vegetables with high pesticide residues reduces sperm quality, compromising the ability to deliver a baby.


Pesticides in food, enemies of male fertility. A new study by Harvard University scientists found that consume fruits and vegetables with high pesticide residues reduces the sperm quality, compromising the ability to bear a child.

Notoriously harmful to health and lately also considered carcinogenic, these substances also have negative effects on fertility. In particular, the research revealed that men who ate fruits and vegetables characterized by high levels of pesticide residues had lower numbers and a lower percentage of normal spermatozoa than those who used to consume products characterized by lower levels of pesticides.

The most "risky" foods according to the American analysis are for example strawberries, spinach and peppers. And the men who preferred them showed signs of it. The one conducted by researchers at the Harvard TH Chan School of PublicHealth is the first study to examine the link between exposure to pesticide residues from fruit and vegetables and sperm quality.

The researchers used data from 155 men using as many as 338 semen samples provided between 2007 and 2012, along with information on the participants' diet. Researchers classified fruits and vegetables based on high levels of pesticide residues (such as peppers, spinach, strawberries, apples, pears) or low (such as peas, beans, grapefruit, and onions), based on data from the Department of United States Agriculture.

READ also: The 12 foods with the most pesticides

They then took into account other factors, such as smoking and body mass known to affect sperm quality. They then sought to highlight the connections between men's intake of pesticide-containing products and the quality of their sperm.

The results showed that men who consumed more fruit and vegetables with high levels of residual pesticides (more than 1,5 daily servings) had 49% fewer sperm per day and 32% fewer normal sperms. compared to men who consumed less (less than half a portion per day). They also had a lower sperm count.

“This is the first report that links the consumption of pesticide residues in fruit and vegetables, the route of primary exposure for most people, the harmful effect on reproductive health of human beings ", he said Jorge Chavarro, professor of nutrition and epidemiology and author of the research.

Several studies have shown that consuming fruit and vegetables results in measurable levels of pesticides in the urine. Others have found associations between occupational and environmental exposure to pesticides and lower semen quality. But few had related the consumption of pesticide residues in food to health effects, and no one had examined the effects on sperm quality.

"These results they should not discourage the consumption of fruits and vegetables in general", said Chavarro, however. “In fact, we found that consuming more fruits and vegetables with little or no pesticide residues was beneficial. This suggests that implementing strategies aimed at avoiding pesticide residues, such as consuming organically grown products or avoiding products that are known to have large amounts of residues, may be the way to go. " A recent analysis revealed that eating organic for a week reduces pesticide levels in the body by 90%.

How can we defend ourselves? Better to consume foods that generally have less pesticides, avoiding those that are more processed or that absorb more. Here you are the list of those that in 2014 contained the most.

The WHO recently classified 5 other pesticides as human carcinogens. Be careful what we eat.

WHO: 5 pesticides classified as carcinogenic to humans

Pesticides in fruit and vegetables: here's how to protect ourselves. The service of the hyenas

Pesticides in almost all the foods we put on our plate, word of EFSA

6 ways to reduce exposure to pesticides

The PFAS are also in the ketchup: shock survey detects the worst and best brands, the US ranking ❯

add a comment of Pesticides in fruit and vegetables cut sperm in half: the Harvard shock study