Pesticides in almost all the foods we put on our plate, word of EFSA 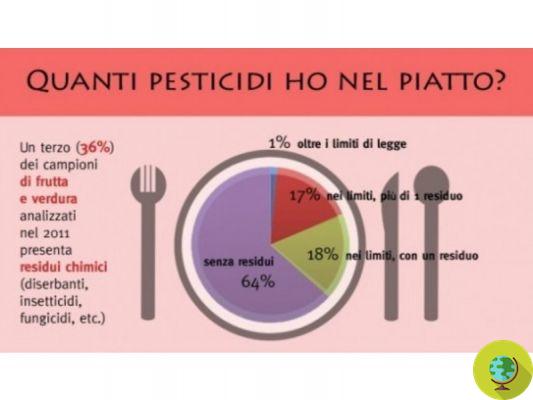 Almost all the foods we put on our plate contain pesticides. The percentage is very high and reaches 97,4%. Word of EFSA, which however underlines that the levels of pesticides present normally do not exceed the legal limits.


Almost all the foods we put on our plate contain pesticides. The percentage is very high and reaches 97,4%. Word of EFSA, which underlines, however, that the levels of pesticides normally present do not exceed the legal limits.

A little less than 55% of the foods we eat are free of detectable traces of pesticides. And 1,5% unfortunately exceeds the legal limits. In 27% of the samples analyzed by EFSA, residues of more than one pesticide were found. This is the case of the multiple residues, which are of major concern as we do not know the health effects of combining different crop protection products in one food.

THEEFSA conducted its own investigation of pesticides taking into consideration 81 thousand food samples from the European Union, Iceland and Norway. EFSA analyzed samples of fresh or processed food products.

In summary, here the data collected by the EFSA analyzes:

- The 97,4% of the samples analyzed fell within the legal limits.
- The 54,6% it was free of detectable residues.
- The1,5% it clearly exceeded the legal limits, taking into account the uncertainty of measurement. thus initiating legal or administrative sanctions against responsible food business operators.
- Residues of more than one pesticide (multiple residues) were detected in the 27,3% samples.

There is however a positive figure: compared to 2010 results, when the same food products were analyzed, except wine, the percentage of samples exceeding the legal limits decreased for all the products examined.

EFSA used data from the European Union coordination program to assess whether the current dietary exposure to pesticide residues represents a risk to human health long-term (chronic) or short-term (acute).

According to the conclusions of the European Food Safety Authority, The presence of pesticide residues in food is unlikely to have a long-term effect on consumer health. Regarding short-term exposure, the risk for European citizens exposed to harmful residue levels through diet was judged to be low.

So taking foods with pesticide residues does not involve health risks, even with an accumulation that could occur in the long term? If in doubt, it is better to choose as much as possible organic food and grown in a natural way, without pesticides, perhaps right in our garden.

Eating organic for a week reduces pesticide levels in the body by 90%
Organic food is richer in antioxidants and contains fewer heavy metals
Eating organic reduces exposure to pesticides. Confirmation in a new study

Pesticides in orange juice: here's the trick to reduce the risk of ingesting them ❯

add a comment of Pesticides in almost all the foods we put on our plate, word of EFSA