Pesticides: guess which fruits and vegetables are the most contaminated? The "dirty dozen" ranking 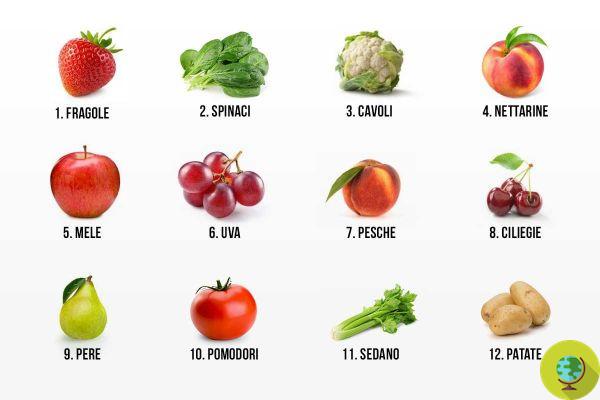 Strawberries, for a change, but also peaches, apples and a new entry: chilli! Nearly 70% of non-organic fresh produce sold in the United States contains pesticide residues potentially harmful. This is said by the American working group on the environment, the EWG, which classified the levels of pesticide residues in fruit and vegetables based on samples taken by the US Department of Agriculture and the Food and Drug Administration.


It is the 17th consecutive year that theEnvironmental working group analyzes and announces the results of an interesting analysis that takes into consideration about 50 different types of fruit and vegetables to assess the presence of potentially dangerous pesticides that consequently end up on our tables.

Read also: The dirty dozen 2020: which fruit (and vegetables) are most contaminated with pesticides?

Every year a Dirty Dozen ™ comes out, a "dirty dozen”Of vegetables and fruit with high levels of chemicals, found after washing and peeling every single ingredient. Also in 2021 the strawberries the most contaminated fruit and spinach as for vegetables.

Imazalil, a hormone-modifying fungicide and classified by the Environmental Protection Agency as a probable human carcinogen, was detected in nearly 90% of citrus samples tested by EWG in 2020 and in over 95% of USDA tested mandarin samples in 2019.

I cabbage remain in third place, now also flanked by turnip greens, as among the products with the highest pesticide load. After being tested for the first time since 2012 and 2011, respectively, the i pepperoni and chili Peppers are included in this year's list in 10th place. In tests, the most frequently detected pesticide is DCPA, sold under the Dacthal brand. The EPA classifies DCPA as a possible human carcinogen and in 2009 the European Union banned it. Other pesticides are neonicotinoids and potentially neurotoxic pyrethroids.

As in past years, peppers still contain worrying levels of acephate and chlorpyrifos, organophosphate insecticides that can damage children's developing brains, so much so that their use on some crops in the United States and entirely in the European Union is banned. . Additionally, more contaminated fresh items, such as spinach, strawberries, and other Dirty Dozen fruits and vegetables, still have high levels of pesticides in their frozen forms.

Of the 46 items included in the analysis, these "dirty foods" were contaminated with more pesticides than other crops (rankings are based not only on the percentage of samples with pesticides but also on the number and quantity of pesticides on all samples and on individual samples). Here are the main findings:

add a comment of Pesticides: guess which fruits and vegetables are the most contaminated? The "dirty dozen" ranking