In Malta, ice creams with ethylene oxide are recalled, while the Bennet supermarket chain recalls some batches of Bisfrolline.

The recalls of food contaminated with ethylene oxide, the dangerous pesticide banned by the European Union for some time now, continue. The new barrage of recalls comes from Malta, where they have been involved, among others, too ice cream of the Milka and Toblerone brand.


The Directorate for Environmental Health of the Maltese Superintendency of Public Health, in fact, bans some products, not to be consumed because they contain an ingredient potentially contaminated by ethylene oxide. Among these, gods stand out again ice creams and the alert, which began with sesame seeds, has now clearly shifted to carob seed flour, a food additive.

Here are the ice creams collected in Malta:

Even if the recall does not directly concern our country, unfortunately it shows us once again how widespread ethylene oxide is by now, also found in French ice creams and beyond: the alert also touched the US multinational Mars, specialized in confectionery like the iconic Snickers and Twix, which he has withdrawn from supermarkets German several batches of branded ice cream Snickers, Bounty, Twix e M&M’s  due to the probable presence of the dangerous carcinogenic pesticide (Read here: More ethylene oxide in ice cream, from Twix to Bounty, maxi-call for Mars products).

And, as we said, the problem no longer concerns only sesame seeds, but also the carob seed flour, a food additive widely used in desserts.

At the same time, there is also a food recall for some batches of Bisfrolline with branded red blackberry and blueberry jam Valdenza always due to the possible presence of ethylene oxide in one of the ingredients.

Precautionary note due to the presumed presence of ethylene oxide in an ingredient used in the product batches indicated above, we read in the note.

Here is the recalled product: 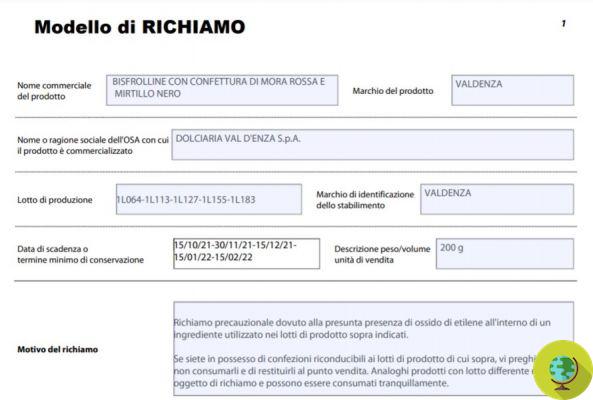 Read all of our articles on food warnings and ethylene oxide contamination: