Pesticide cocktail in grapes and oranges: the list of the most contaminated fruits and vegetables in the UK has been revealed 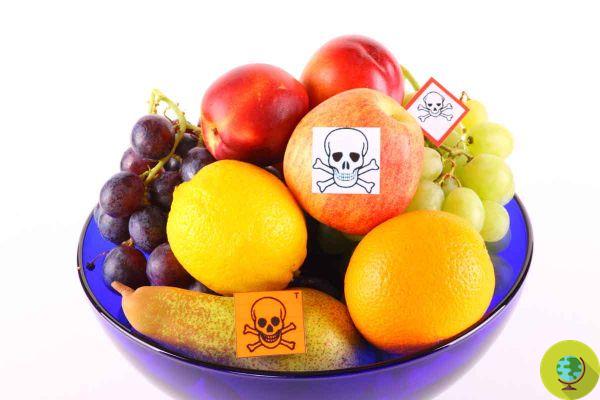 Pesticides are now ubiquitous in fruits, vegetables and various other products we consume every day. This time, this is confirmed by a new study conducted in the United Kingdom which found traces of 122 pesticides in 12 fruit and vegetables.


It is a new "dirty dozen" the one reported by Pesticide Action Network (PAN) which shows once again the enormous exposure to pesticides of consumers, in this case from the UK but we know very well that the problem is global.

But let's start from the beginning. The British government constantly monitors, year after year, the levels of residues in food consumed in the country. Pan analyzed this official data by identifying 122 different pesticides and drawing up the ranking of 12 most contaminated fruit and vegetables.

Data analysis showed that almost all grapes and oranges contain a "pesticide cocktail" but included in the "dirty dozen" (not to be confused with the one drawn up by the EWG) there are 10 more.

This is the ranking of the most contaminated fruit and vegetables (the percentage indicates the samples with the most pesticide residues present):

Each fruit or vegetable on the list had traces of two or more pesticides but some did up to 25 together!

And some of these substances are extremely dangerous: 47 pesticides have been linked to cancer, 15 are toxic to reproduction and development, and 17 are cholinesterase inhibitors and can damage the respiratory system. A quarter of the pesticides identified are then suspected endocrine disruptors.

What pesticides are we talking about? Pan reports having identified:

Each fruit or vegetable on the list contains two or more types of pesticides, but some contain up to 25. As always, the level of individual pesticides is within the legal limits, but the problem is that little is known about the effect that the combination of several substances together can have, the now known and much discussed "pesticide cocktail " all the implications for human health are not yet known.

These figures highlight the wide range of chemicals we are exposed to on a daily basis through our diet. As safety limits continue to be set for only one pesticide at a time, evidence is growing that chemicals can combine to be more toxic, a phenomenon known as the cocktail effect.

The solution? Push as much as possible to make drastic decisions on the use of pesticides and use more organic products but, as Dr. Mole recalls:

Hardly anyone in the UK can afford financially or access a completely organic diet, that's why we publish the dirty dozen, to help consumers prioritize which products to avoid.

It is also recommended to buy from EU countries and the UK, as pesticide regulations are more restrictive than elsewhere anyway.

The analysis presented, however, has limitations, as reported by Pan himself who writes:

While this test is useful to some extent, it only provides a snapshot over time because it is inconsistent and piecemeal. For example, tomatoes could be tested one year and not the next and only a small fraction of tomatoes consumed in the UK are tested. Likewise, the limited amount of samples tested does not reflect the wide range of products available to the UK public. In 2020, only six varieties of fruit and fifteen types of vegetables were tested. (...) of the 12 fruits and vegetables of the Dirty Dozen in 2019, the government chose to test only three in 2020, ignoring three quarters of the disturbing production of the previous year.

Despite this, it seems clear to us that the pesticide problem is worrying and must be tackled in a serious way also because, in addition to hurting our health, the use of pesticides damages the environment and animals.

With red wine a lot of joy and a dazzling smile! ❯

add a comment of Pesticide cocktail in grapes and oranges: the list of the most contaminated fruits and vegetables in the UK has been revealed