Pasta extends life. Which one to choose and how much to consume per day 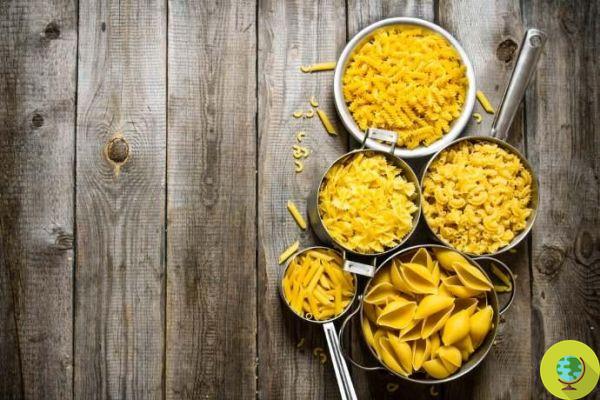 Not only would pasta not make you fat, but with the right condiments and the right quantities it would become a real elixir of life! The new scientific confirmation.

Not only would pasta not make you fat, but with the right condiments and the right quantities it would become a real elixir of life! The new scientific confirmation.


Macaroni, penne, spaghetti, fettuccine: whatever shape it has, pasta is always pasta and woe to not include it in our diet. In addition to putting us in a good mood, his majesty pasta, in fact, would also have the advantage of extending our life by 4 years.

All thanks to the carbohydrates which, in spite of the miraculous low carb diets, such as the famous ketogenic diet, taking them daily would guarantee longevity.

The scientific journal The Lancet Public Health aimed to analyze the correlation between dietary carbohydrate intake and mortality by showing that those who eat carbohydrates such as cereals, rice and pasta live longer, at least 4 years.

Low-carbon diets, that is, limiting carbohydrates in favor of a higher intake of protein or fat, or both, are a popular weight loss strategy. Still, the long-term effect of carbohydrate restriction on mortality is controversial and could hinge on whether dietary carbohydrates are replaced by plant-based or animal-based fats and proteins.

READ also: Do you want to live longer? Don't eliminate carbohydrates from your diet! Word of science

For the analyzes, 15.428 adults between the ages of 45 and 64 were examined in four US communities who completed a dietary questionnaire during an enrollment in the Atherosclerosis Risk in Communities (ARIC) study (between 1987 and 1989) and who did not report an extreme caloric intake of: <600 kcal or> 4200 kcal per day for men and <500 kcal or> 3600 kcal per day for women).
Researchers investigated the association between the percentage of energy resulting from carbohydrate intake and mortality from different causes, taking into account possible non-linear relationships and then further examined this association, combining the ARIC data with the data for the carbohydrate intake reported from seven multinational prospective studies in a meta-analysis. Finally, they evaluated the replacement of animal or vegetable sources of fat and protein for carbohydrate-affected mortality.

In addition, the scholars have listed all the points point by point benefits of pasta:

Which pasta to choose and how much to consume per day

According to the experts, there are no macroscopic nutritional differences with egg, wholemeal or semolina. Wholemeal pasta has the same composition as semolina pasta with the addition of a small amount of fiber, while egg pasta has a little more fat and fewer carbohydrates.

Those who are celiac or intolerant to gluten have available wholemeal rice or pasta, quinoa or buckwheat.

Pasta is a food rich in starch with a moderate content of proteins (10%) of low biological value and with a low lipid content. It also contains vitamin PP and few vitamins B1 and B2, a high quantity of potassium and phosphorus and a fair amount of calcium and sodium.

In the media, experts advise about 80 grams of pasta per day (120 for fresh egg pasta) and to prefer one cooking al dente in order to get a good sense of satiety and enjoy its lower glycemic index.

Fear of a climate apocalypse prevents people from having children. I study ❯

add a comment of Pasta extends life. Which one to choose and how much to consume per day