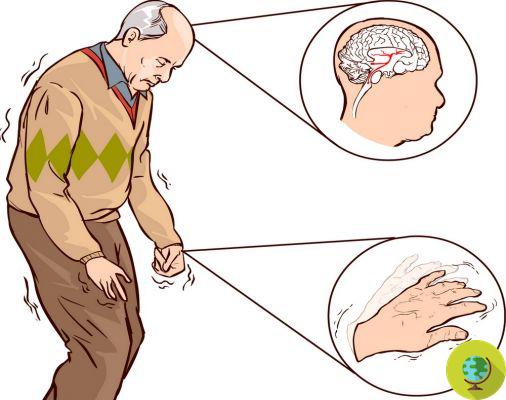 What are the most common symptoms of Parkinson's disease?

Il Parkinson's disease is a degenerative disease of the central nervous system. Caused by the progressive death of the nerve cells in the brain that produce the neurotransmitter dopamine, which controls body movements, Parkinson's often manifests itself with almost ignored or underestimated signals. But what are they the most common symptoms of Parkinson's?


Over time, a lot of weight has been given to symptoms such as tremor and slowdown, while today it is given greater relevance to cognitive impairment. This emerges from a study by the International Parkinson Disease and Movement Disorder Society, the scientific society that brings together the world's leading experts on the subject, which dictated new diagnostic criteria for Parkinson's disease, published in the Lancet Neurology journal.

As for the slowdown, or bradykinesia, for example, it will no longer be enough to say that it is present, but it is also necessary to evaluate which particular movements are losing speed and how the amplitude of the compromised movement has diminished.

Parkinson's, the most common symptoms of the disease

Parkinson's disease occurs when dopamine production in the brain drops substantially due to degeneration of neurons. From the medulla to the brain they also begin to appear accumulations of a protein called alpha-synuclein, which would spread the disease throughout the brain. All of this involves a number of symptoms such as:

1. Loss of sense of smell and, in some cases, loss of taste. Dopamine is a chemical messenger that carries signals between the brain, muscles, and nerves throughout the body. As soon as the dopamine-producing cells die, the sense of smell is impaired.

2. Sleep disturbances, restless legs syndrome (a tingling sensation in the legs and a feeling of having to move them) and sleep apnea

3. Intestinal problems, such as constipation and intestinal gas

4. Stiffness in facial expression, which can also cause difficulty in swallowing

5. Persistent neck pain, which can also occur in the form of tingling or a more general physical discomfort that is felt up to the shoulder and arm

READ also: FRUIT PREVENTS ALZHEIMER AND PARKINSON THANKS TO POLYPHENOLS

6. Bradykinesia, which is the slowing down and loss of spontaneous and routine movements, such as slow and tiring writing

8. Reduced arm movement which, unlike arthritis or injury, does not cause pain

9. Excessive sweating: with Parkinson's, the skin and sweat glands also change. This can lead to sweating a lot or even excessively oily skin or dandruff in your hair

10. Changes in mood and personality, such as anxiety and depression.

add a comment of Parkinson's disease: 10 most common symptoms