One potato chip leads to another: fatty foods never satiate 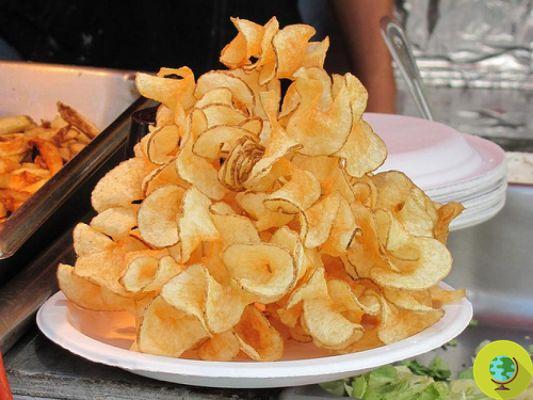 Appetite comes with eating, a proverb said. And, apparently, it seems that this is the case, if they are swallowed foods rich in saturated fat that would send the brain into a tailspin and "kill" the sense of satiety. In short, that recurring impression of a "distended stomach" that appears every time we overdo it with the fork and that would make us continue to eat indefinitely even in the days to follow, now has a scientific explanation.


This is provided by a study by researchers from the Soutwestern Medical Center of theUniversity of Texas published in the "Journal of Clinical Investigation"Which have shown how the fats of some foods" corrupt "our brain to push the body to ignore the signals that regulate the sense of satiety, avoiding to make us" gorge "with excess food.

Practically, Leptin e insulin, those fantastic hormones that usually intervene in weight regulation and "suggest ”to the stomach that it is time to stop eating, are literally KO'd by high-fat meals. Thus allowing the belly to “remain a hut”, in that the stomach keeps getting the wrong message, that it is still hungry.

"Normally our body tells us when it has enough, but this doesn't happen in the case of particularly good foods," she explains Deborah Clegg, the scientist who coordinated the research conducted on rodents. Clegg's team of scientists, by administering three different types of fat into the brains of some mice - the monounsaturated fatty acids,oleic acid (in olive oil) andpalmitic acid (present in foods such as butter, cheese, milk and meat), they have found how to particularly contribute to sending the brain into a tailspin and compromising the work of the "line-saving hormones" is precisely palmitic acid, present in large quantities in foods rich in saturated fats ».

In addition to providing an alibi for the feelings of guilt of all of us who had always attributed to our greed that "continuous desire for something good" and perhaps redeemed us from one of the seven deadly sins, the study, even if conducted on animals, confirms what nutritionists from all over the world have been recommending for some time, namely limit saturated fats to a minimum, mainly present in foods of animal origin.

A herbal tea for every occasion: how to take them daily ❯

add a comment of One potato chip leads to another: fatty foods never satiate