One lie leads to another: so the brain gets used to lying more and more 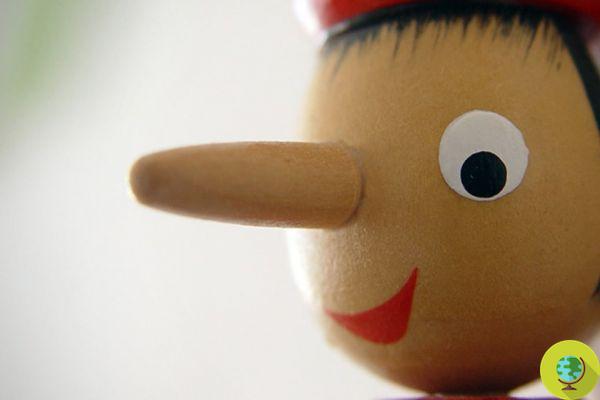 One lie leads to another. A research entitled "The brain adapts to dishonesty" seems to reveal that those who lie once are more inclined to do so again in the future. The cause of this is that the brain adapts to negative emotions and tends to repeat the same pattern.

One lie leads to another. A research entitled "The brain adapts to dishonesty" seems to reveal that those who lie once are more inclined to do so again in the future. The cause of this lies in the fact that the brain adapts to negative emotions and tends to repeat the same pattern.

The study conducted at the Department of Experimental Psychology of theUniversity College of London (UCL) from the team led by Neil Garrett took it as a sample 80 people aged between 18 and 65. The experiment simply consisted in guessing the number of coins inserted in a glass jar and communicating it via PC to another unknown person. The scenarios were different and some of the participants had been put in a position to have advantages if they lied on the estimate of the number of coins or rather some if they told a lie they brought benefits to themselves but damage to others, in some cases there was no harm for anyone and in others there were advantages for both.

Read also: HOW TO RECOGNIZE AND DISCOVER A LIE IN 6 STEPS

It was thus seen, as the experiment progressed, that those who had lied and gained an advantage for themselves were more likely to continue doing so. To scientifically explain the mechanism behind this situation, the scientists subjected some of the participants to functional magnetic resonance. What stood out in the liars was a progressive decrease in activity in the amygdala, the part of the brain that is activated in response to different types of emotion.

"It is as if the brain's muffled response to repeated dishonest actions reflects the emotional reaction to these actions," said Professor Garrett.

In short, it seems that the brain somehow adapt to dishonesty e this mechanism is evident due to the amygdala whose activity other researches have already linked to the rejection of immoral attitudes. In this case it has been seen that, by continuing to tell lies, the amygdala tends to reduce its response more and more.

In light of these new results: if you want to prevent a small lie from getting out of hand, it is better to solve the problem upstream by trying to be as honest and sincere as possible from the beginning!

A touch of turmeric to prevent diabetes ❯

add a comment of One lie leads to another: so the brain gets used to lying more and more