Omega 3 supplements: do you really need them if you don't eat fish or are vegetarian / vegan? No, if you follow this recommendation 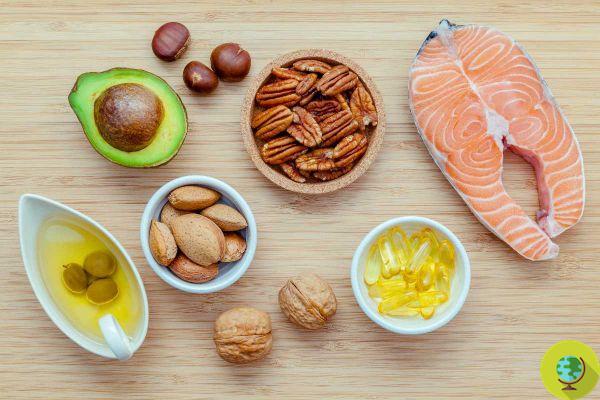 Omega 3 fatty acids are essential for the health of our body. But how to take them if you are on a vegan diet?

Omega 3 fatty acids are essential for the health of our body. But how to take them if you are on a vegan diet?


There is confusion about dietary fats, and especially about Omega 6 essential fatty acids e Omega 3. These are called "essential" fats, because they are not produced by the body, but they are essential for reducing inflammation, fighting heart disease and inhibiting the formation of dangerous clots in the bloodstream. Most of us get a lot of Omega-6s from the vegetable oils we use for cooking, but Omega-3s are harder to find, but no less important.

Le best sources of Omega-3 are fatty fish such as sardines, salmon and mackerel or fish oil. But if you are following a vegan diet, Omega 3s can be obtained through nuts and oil seeds, such as flaxseed and chia seeds, but the question is, are you getting enough? (Read also: We have a problem with Omega 3 supplements - not all of them would be effective for heart health)

A diet rich in Omega-3 fatty acids has been linked to better cardiovascular healthas well as better brain function. According to a broad study, it was noted that adequate daily doses of Omega 3 contributed to reduce the risk of cardiovascular mortality.

But if you're eating plant-based, Omega-3 is harder to get in the right amounts, as you may not get enough of it just by eating nuts and seeds. If so, there is a need for a supplement? Here's what the experts say.

What are Omega-3 fatty acids?

You can only get ALA through diet, by eating Chia seeds, hemp seeds o flax seed e nights. Your body then converts the ALA into EPA and DPA, which have the greatest health benefits. In fact, EPA is thought to play a role in heart health, while DHA is an important component of the brain's gray matter and is found in the retina and cell membranes.

Since DHA plays an important role in brain and eye health, especially during the growth and development stages, it is especially important to have enough of it during pregnancy, breastfeeding and childhood. In fact, one search shows that Omega-3 intake during pregnancy helps reduce the risk of premature birth and babies with low birth weight. (Read also: Not just fish: the 5 plant sources of Omega 3)

Can You Get Enough Omega-3 From Diet Alone?

This is a difficult question, as it also depends on how well your body is able to convert ALA to DHA and EPA. The conversion rate is variable and is affected by the genetics and by enzymes.

There is a lack of research into the body's ability to obtain adequate EPA and DHA through natural conversion rates from food. Most of the research has been conducted onsupplementation or on an omnivorous diet, but one studio dell’American Journal of Clinical Nutrition revealed that i vegans they can get the right amounts of Omega 3 from plants.

The study concluded that the following women plant-based diets have significantly more omega-3 fatty acids in their blood than vegetarian egg-lacto and fish and meat eaters.

Hence, supplements (EPA and DHA) do not appear to be essential for vegan health, because the body can produce these fatty acids from ALA. About two grams of ALA per day has been associated with a modest lowering of risk of heart disease, and can be obtained by eating six walnut halves, two tablespoons of hemp seeds, or one tablespoon of chia seeds or ground flax seeds every day.

However, there are exceptions, and if you are unable to meet your ALA needs through diet, it is recommended that you take a Long Chain Omega-3 Fat Supplement.

Another tip is avoid consuming a lot of Omega-6 fatty acids short-chain, called linoleic acid, as this can reduce the amount of long-chain Omega-3 fats the body takes in through food. Furthermore, according to the Vegan Society to combat this problem you could consume it vegetable oils, sunflower, corn and sesame, all of which contain high amounts of ALA, and limit the amount of pumpkin and sunflower seeds.

add a comment of Omega 3 supplements: do you really need them if you don't eat fish or are vegetarian / vegan? No, if you follow this recommendation