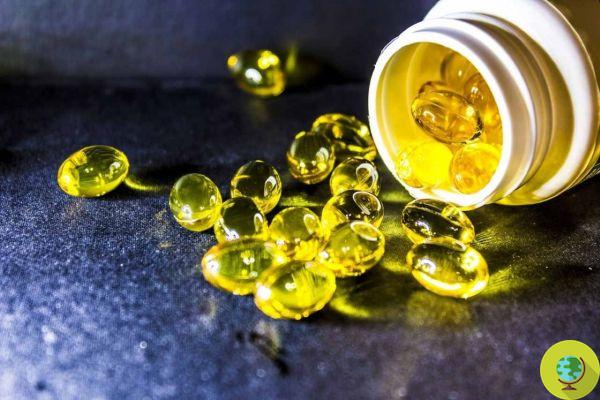 Omega-3 supplements would have a positive effect in Alzheimer's patients, slowing cognitive impairment

September 21 is World Alzheimer's Day, we re-propose this recent study which reveals that supplements based on omega-3 fatty acids would have a positive effect on memory in Alzheimer's patients, slowing cognitive impairment due to the disease


Researchers from the Karolinska Institutet in Sweden conducted a study that for the first time related the damage caused by Alzheimer's and taking omega-3 supplements. The study was conducted on a small group of people with Alzheimer's (33 people): some of these (18 people) were given omega-3 fatty acid supplements in the morning and evening; the other participants did not take any type of supplement.

During the study period (six months), spinal fluid samples from all participants were collected and analyzed, who also underwent several memory tests. Memory function in patients who took the supplements remained stable, while in patients who did not take the supplements there was a worsening of memory skills. However, the scientists found no differences between the two groups in relation to biomarkers in the spinal fluid samples.

(Also read: New study confirms omega-3s extend life. Fill up on foods that are richer in them)

Interestingly, differences in the progression of the disease were observed within the group of patients treated with supplements: in fact, there was an increase in two of the markers connected to nerve cells damaged by Alzheimer's. This increase in markers, however, had no empirical findings in memory tests.

This study lays the foundation on a broader research conducted by the same authors a few years ago on over 200 participants with mild forms of Alzheimer's: during that study, researchers tried to figure out whether omega-3 acids were transferred from supplements directly to the brain. - with a positive outcome.

While this information is not enough to make omega-3 supplements an essential part of treating Alzheimer's patients, it is still a good starting point for further testing in this regard. Scientists, for now, advise Alzheimer's patients to stay physically active and to introduce omega-3 fatty acids into their diet - through nutrition or in the form of supplements, to keep them longer. their memories and their ability to remember.

Read all of our articles on Omega 3

Psylus supplements withdrawn due to the presence of ethylene oxide ❯

add a comment of Omega-3 supplements: discovered this benefit in Alzheimer's patients