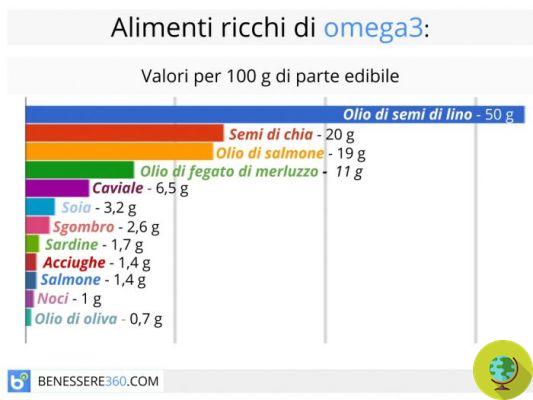 The higher the levels of Omega 3 in the body, the lower the chance of getting type 2 diabetes. A study proves this

Il 2 type diabetes it is increasingly widespread all over the world, especially in Western countries where people often eat too much and badly. As is now known, being overweight is one of the most significant risk factors while abalanced nutrition it's a good amount of physical activity they are certainly correct habits that help to avoid it. But now new research has highlighted the potential of Omega 3 fatty acids in the prevention of this disease.


The study, conducted at the University of Eastern Finland, concluded that the greater the quantity of Omega 3 present in the body, the lower the chances of finding yourself suffering from type 2 diabetes. fatty acids are "essential" as our body is not able to synthesize them by itself but must inevitably take them with food. Omega 3 are contained in fish, especially fatty fish (salmon, mackerel, trout, sardines) but also in vegetables such as flax seeds, nuts, soy, etc.

The research, published on Diabetes Care, examined the concentrations of Omega 19 fatty acids in the blood of over 3 men between 2.000 and 42 for 60 years. Over time 422 participants became ill with type 2 diabetes and what immediately jumped to the eyes of the researchers is that they were precisely those who had lower concentrations of essential fatty acids in the blood (33% less than the healthy participants. ).

Researchers therefore advise everyone to consume fish rich in Omega 3 a couple of times a week (or replace it with vegetable counterparts), follow a healthy diet in general and do regular physical activity.

- Not just fish: the 5 plant sources of Omega 3

- Omega 3s extend the life of the elderly

Nettle: the thousand benefits and how to best use it ❯

add a comment of Omega 3: reduce the risk of type 2 diabetes