Oktoberfest, the triumph of beer, accompanied by sausage, chicken and meat of all kinds. Hell for vegans, at least so far. Finally, even the most famous European beer festival opens its doors to those who do not eat meat and drink traditional beer

Oktoberfest, the triumph of beer, accompanied by sausage, chicken and meat of all kinds. Hell for the vegans, at least so far. Finally, even the most famous European beer festival opens its doors to whom does not eat meat and drinks traditional beer.


In fact, vegans drink only beer produced without the use of animal derivatives and without additives in the ingredients and in the fermentation process. But for nearly 200 years, from its origins until now, Oktoberfest had turned its back on them. Now finally, in this edition alongside the classic courses and drinks, the organizers have decided to break with tradition and offer vegan dishes and wine.

Bavaria's Oktoberfest is nirvana for a meat lover but it is a nightmare for those who, in the face of a precise ethical choice, he decides to spare the life and suffering of the animals. Last year, during the festivities they were consumed (see also killed) half a million chickens, 116 whole oxen and 115.000 pork sausages served in the classic Munich stend in just three weeks.

This year, in an effort to satisfy even the changing food preferences in visitors, the managers of the beer stands have also included in their menus soy cutlets and wines produced without additives.

The first to leave were the Bachmaier, a family who, taking advantage of their son's experience as an apprentice in a vegan restaurant based in Munich, introduced this true revolution within the Oktoberfest. Among the dishes, the family has added to its repertoire vegan beer and medallions no longer of pork but also of soy with sauteed chanterelles and the traditional cheese noodles, which is usually served with eggs and cheese, but without these two ingredients.

"Vegan food is the best way to ensure that people of all religions, as well as those who do not eat animal products out of conviction, are not excluded from the festivities," he said Martin Jonas, who worked in Herzkasperl for four years. “While it's hard for the Bavarians to change their approach, it makes sense. It is the lowest common denominator ". 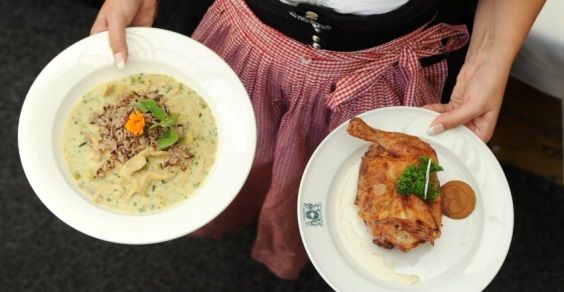 “As the event becomes more and more international, people with special dietary needs and different culinary tastes are becoming there standard”Added Wolfgang Nickl of the Munich City Council, responsible for organizing the Oktoberfest.

But it's not just foreign visitors who prefer the non-meat menu. Vegetarians and vegans are on the rise in Germany. About 800.000 of the country's 7 million vegetarians give up all animal products, according to the German Vegetarian Association.

There is no longer any reason to desert Oktoberfest, as long as you drink strictly vegan wine and beer.

- Advanced beer: 3 vegan recipes to reuse it in the kitchen

- Craft beer: the machine is coming to produce it at home in 4 hours (video)

Olive oil is better than Viagra: 9 tablespoons a week are enough and that's it ❯