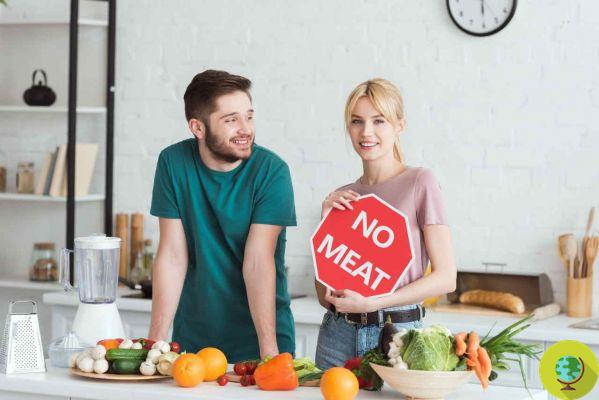 
Scientific research continues to question the vegetarian diet: is this type of diet really better than others in terms of health benefits? A new study now highlights that vegetarians have a healthier disease biomarker profile than meat eaters.

The research, conducted on over 177 healthy adults (aged 37 to 73) from the UK, was presented at the European Congress on Obesity (ECO), which is taking place online these days.

The team from the University of Glasgow that carried out the study wanted to investigate, by analyzing the data from the UK Biobank study, whether food choice can make a difference in terms of the levels of disease markers in blood and urine.

All study participants, who had not reported major diet changes in the past five years, were divided into vegetarians (4.111 participants) and carnivores (166.516 participants) based on their self-reported diet. The researchers then looked at 19 biomarkers of each participant's blood and urine, related to diabetes, cardiovascular disease, cancer, liver health, bone, joint and kidney function.

Biomarkers can have positive or negative effects on health, promote or prevent cancer, cardiovascular disease, age-related diseases and other chronic conditions, and are also used extensively to assess the effect of diets on people's health.

Looking at the data, the scientists found that vegetarians had a healthier biomarker profile than meat eaters. This was valid for adults of any age and weight, and the results were not affected by smoking or alcohol consumption either.

The analysis found that vegetarians had significantly lower levels of 13 biomarkers than meat eaters, including:

However, vegetarians also had lower levels of beneficial biomarkers including "good" cholesterol (HDL), vitamin D, and calcium. In addition, they had significantly higher levels of blood fat (triglycerides) and cystatin-C (protein that indicates the status of kidney function).

The experts also specified that the evidence for the metabolic benefits associated with being a vegetarian is unclear. In fact, even if the sample was large, the study was observational, so it is not possible to draw conclusions on the relationship between cause and effect.

The research also has several limitations, including the fact that biomarker samples were tested only once for each participant, and it is possible that these may change depending on factors not related to diet, such as existing diseases and lifestyle habits. not measured. In addition, participants were relied upon to report their eating habits.

However, these are important indications to be deepened with other studies. As Dr. Carlos Celis-Morales, lead author of the study stated:

“Our results offer real food for thought. In addition to not eating red and processed meat that has been linked to heart disease and some cancers, people following a vegetarian diet tend to consume more vegetables, fruits, and nuts that contain more nutrients, fiber, and other potentially beneficial compounds. These nutritional differences may help explain why vegetarians seem to have lower levels of disease biomarkers that can lead to cell damage and chronic disease "

add a comment of Now it's official! Vegetarians have healthier biomarkers than meat eaters (and risk fewer heart attacks)