Not just vitamin D, exposure to the sun also has another newly discovered beneficial effect 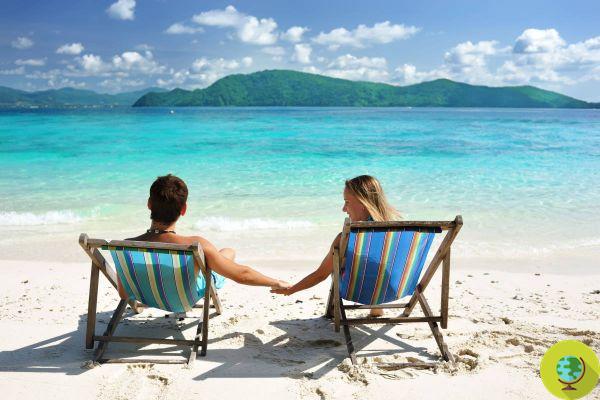 The sun has amazing effects on increasing sexual desire. To reveal it is a new research conducted by the University of Tel Aviv

Sun exposure is not only valuable for filling up on vitamin D, the sun is also a powerful aphrodisiac for both men and women. This is revealed by an interesting new research conducted by the University of Tel Aviv which shows that sunlight affects the regulation of the endocrine system responsible for the release of sex hormones.


If you want to ignite the passion, exposing yourself to the sun can be very useful: to say it is science. A team of researchers from Tel Aviv found that theexposure to UVB rays (ultraviolet radiation of type B) causes an unequivocal effect: the increase in sexual desire. And this consequence was found in both sexes. The groundbreaking discovery was illustrated in an article that appeared a couple of days ago in the prestigious scientific journal Cell Reports.

It has been known for many years now that ultraviolet radiation from sunlight increases testosterone levels in males and we also know that sunlight plays an important role in both behavioral and hormonal regulation of sexuality - explains Dr. Carmit Levy, who took part. research - However, the mechanism responsible for this regulation has remained unknown. Our study allowed a better understanding of this mechanism.

Read also: Kisspeptin, the kissing hormone that could help women with HSDD

The correlation between sun exposure and increased sexual desire

The research focused on 32 subjects (both male and female) who were asked to fill out two questionnaires - one before sun exposure and the other after treatment - about their passionate and aggressive behaviors.

Both men and women treated with UVB phototherapy at Tel Aviv medical centers showed increased sexual desire, while males also reported increased levels of aggression. For further confirmation, the subjects were asked to avoid sunlight for two days and then sunbathe for about 25 minutes. Blood tests revealed that exposure to sunlight resulted in a greater release of hormones such as testosterone than the day before exposure.

The results of our questionnaire show that for both sexes there is an increase in passion after UVB treatment. - we read in the study - Passion takes two forms: emotional and sexual. UVB radiation affected different components of passion in men compared to women. Women treated with UVB scored higher on physical arousal questions that were more about sexual passion and idealization, while men scored higher on the cognitive dimension of passion, which involves obsessive thoughts about the partner and desire. to know more about her. The skin contains various mechanisms to cope with the radiation of sunlight, and one of them is the p53 protein. However, we must remember that UV exposure is dangerous and can lead to skin cancers.

In the future, this new discovery could lead to a number of useful new therapies, such as UVB treatments for those with sex hormone problems. However, more research is still needed before this ambitious goal can be achieved.

Our findings open up many scientific and philosophical questions. - comments Dr. Levy - As humans, we have no fur and our skin is therefore directly exposed to sunlight. We are only beginning to understand what this exposure does to us and the key roles it could play in various physiological and behavioral processes. It's just the tip of the iceberg.

add a comment of Not just vitamin D, exposure to the sun also has another newly discovered beneficial effect