Not just cancer. Red meat increases the risk of 9 types of diseases 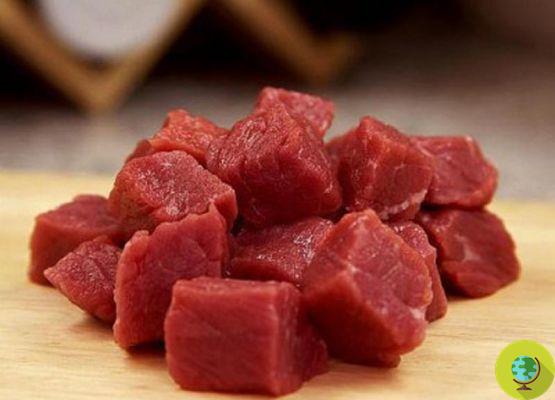 Red meat and cancer, but not only. A new study, the largest to date, has shown that the consumption of red meat, whether processed or not, increases the risk of mortality linked to numerous diseases

Red meat and cancer, but not only. A new study, the largest to date, has shown that cConsumption of red meat, processed or not, increases the risk of mortality linked to numerous diseases.

The study in question was carried out by National Cancer Institute di Bethesda which analyzed data from a large survey called NIH-AARP, on six states (California, Florida, Louisiana, New Jersey, North Carolina and Pennsylvania) and two major metropolitan areas in the United States (Atlanta and Detroit). The analysis lasted 16 years and involved over 536.969 American adults between the ages of 50 and 71.

Participants completed a food questionnaire based on 124 items that were used to examine the intake of total meats, processed and unprocessed meats (beef, lamb and pork) and white meats (poultry and fish), iron and nitrate / nitrite. of processed meats.

Researchers therefore have calculated the daily intake of hemi iron based on a variety of fresh and processed meats, multiplying it by the meat consumption reported by the questionnaire. They then considered all nutritional variables linked the daily calorie intake and classified the calorie values ​​for the entire cohort.

According to the research, red meat intake was associated with an increased risk of mortality during the 16-year follow-up. No substantial differences were found between the consumption of processed and unprocessed meat.

For researchers, the iron eme and in particular the nitrate or nitrite added in processing seemed to drive the association between diseases and their mortality and the consumption of processed red meats. For unprocessed meats, on the other hand, the agents carcinogens that are formed in the cooking.

"This is the largest study to date showing an increased risk of mortality from various causes associated with the consumption of processed and unprocessed red meat and highlights the importance of heme iron, nitrates and nitrites in evaluating relative pathways. the health risks associated with the intake of red meat " explains Arash Etemadi, of the National Cancer Institute in Bethesda.

According to scientists, excessive consumption of meat it is harmful to both our health and the environment. Our ancestors already understood this and ate meat at most once a week, consuming 5-10 kg per year. Modern diets especially in rich countries offer more than 10 times this amount, with animal proteins providing up to a fifth of our energy needs.

DOES MEAT CAUSE CANCER? THE WHO CHOC DOCUMENT

RED MEAT, THE CONFIRMATION: INCREASES THE MORTALITY OF BREAST CANCER

RED MEAT: DOUBLES THE RISK OF HEART, DIABETES AND CANCER

CARCINOGENIC MEAT, EVERYTHING YOU NEED TO KNOW: 20 QUESTIONS AND ANSWERS FROM WHO

According to one of the researchers, John Potter, regarding the effects on the planet, water depletion, methane production and air and groundwater pollution are just the beginning. We must reduce the use of fossil fuels in transport, but livestock production outweighs this cause as a cause of climate change. Potter points out two possible action plans:

“As with many contemporary problems of overabundance and misdistribution of resources, we have to decide whether take action now to reduce human consumption of meat or wait for the decay of large portions of the global system to lead us to poorer planetary, social and human health. "

Still not convinced? here are the 10 reasons to eliminate red meat from your diet.

Not only bisphenol A: new side effects of plastic on the nervous system revealed ❯

add a comment of Not just cancer. Red meat increases the risk of 9 types of diseases