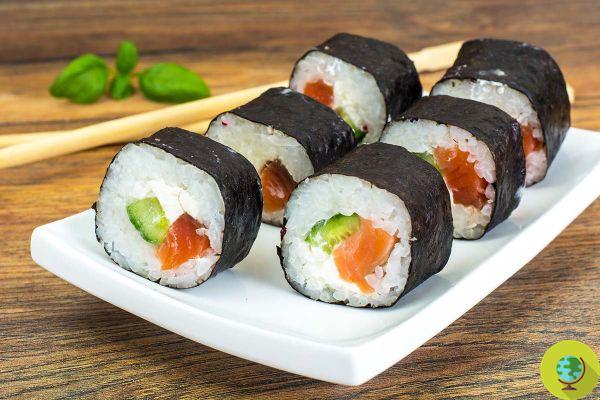 Cadmium, lead, arsenic and aluminum in high concentrations. Sushi lovers will surely be familiar with nori, as its dark leaves surround the rice and other ingredients in the popular Maki Sushi. Good and apparently healthy, these and other marine algae are often contaminated with pollutants.


The German Federal Office for Consumer Protection and Food Safety (BVL) has sounded the alarm following a a test carried out on a large sample of dry algae.

With the growing popularity of Asian cuisine, and in particular Japanese, restaurants serving sushi, also prepared with the help of seaweed, are widespread all over the world. The nori is also widely used in soups, soups, veloutées, salads, vegetable dishes or as a component in food supplements.

The problem is that these, like others marine algae tend to absorb and accumulate pollutants, such as heavy metals or other environmental contaminants.

The food supervisory authorities of the German federal states examined dried seaweed leaves in a national monitoring program in 2018. More specifically, the laboratories tested 165 algae samples to evaluate the presence of different chemical elements. The results have only now been published and they are not very heartening.

Several heavy metals have been found in high concentrations, most notably cadmium, lead, arsenic and aluminum. According to the BVL (and not only), these substances are considered potentially harmful to health.

Here are the metals found inside the dried seaweed leaves analyzed:

In addition to the potentially toxic chemicals, it was also evaluated the presence of trace elements such as iodine, zinc, selenium, manganese and copper, the absorption of which is necessary for health. However, some of these elements can also have adverse health effects when taken in excess.

According to the BVL, while there are no health risks associated with the amounts of zinc, copper, selenium and manganese present, an overdose of iodine can be dangerous for the thyroid.

Over 75% of the algae samples had an iodine content of over 20 milligrams per kilogram of algae. The German BfR, on the other hand, only recommends a maximum amount of 0,5 milligrams of iodine per day, as an excess of this trace element can cause thyroid malfunction.

If products with an iodine content greater than 20 milligrams per kilo are ingested, this indicates a dangerous excess, according to the BfR. Therefore, warnings should be given on products that have an equal or higher iodine content. However, these warnings and the correct information for consumers were missing in 8% of the algae samples.

It would therefore be better to buy, according to Okotest, only seaweed packs in which the iodine content and the maximum quantity to be consumed is clearly indicated.

The world's obsession with sushi is destroying the oceans

Algae: the different types, their properties and how to use them

Spirulina and seaweed supplements: contain too many heavy metals

The optical illusions that will literally take you on a journey through time, according to scientists ❯